WASHINGTON — President Joe Biden plans to sign an executive order Tuesday to raise the minimum wage for federal contract workers to $15 an hour, according to senior administration officials.

The order will go into effect Jan. 30 of next year, according to a fact sheet provided by the administration. Once in place through new and extended contracts, the wage will automatically adjust to changes in the cost of living every year after 2022.

Biden’s order also eliminates the tipped minimum wage for federal contractors, which is $7.65 per hour, by 2024.

The order also guarantees a $15 minimum wage for federal contract workers with disabilities, as a loophole in the Fair Labor Standards Act  allows an employer to pay an individual with a disability less than the minimum wage.

Senior administration officials did not say how many federal contractor workers would benefit from the wage increase, but estimated it would apply to “hundreds of thousands” of them. They said that the wage hike would not lead to job losses.

“This was examined by the Council of Economic Advisors, and it was found that it would not lead to reduced unemployment,” a senior administration official said, adding that the raise “would enhance worker productivity and create higher quality work by boosting workers’ health, morale and effort.”

An official also said the order would reduce turnover, allowing employers to retain top talent, and lower costs associated with recruitment and training.

Democrats earlier this year unsuccessfully tried to make the case for including a gradual federal minimum wage increase in the $1.9 trillion relief package proposed by the Biden administration and passed by Congress. The nonpartisan Congressional Budget Office released a report that found an increase in the federal minimum wage to $15 by 2025 for all workers would reduce poverty and increase pay for millions of low-income people, though the CBO also projected job losses.

About 6 in 10 U.S. adults support a raise in the federal minimum wage to $15 an hour from the current $7.25, according to a Pew Research Center survey conducted from April 5 to 11. 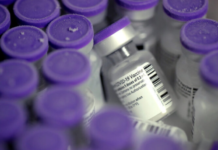