After passing through the House Wednesday afternoon, the long-awaited COVID-19 relief bills are heading to Gov. Gretchen Whitmer’s desk — but not before Democrats put up a fight.

The $4.5 billion supplemental package, if signed by the governor, would allocate some of the $5.6 billion in COVID-19 relief funds that was passed by Congress in December, increase school spending through $1.9 million in federal COVID-19 funds and ban the Department of Health and Human Services from closing in-person school instruction or prohibiting sporting events during a pandemic.

At an event in Dearborn earlier Wednesday, Whitmer said of GOP legislative leaders, per WXYZ-TV: “They have not negotiated with us, which means that I’ve not signed off on any of the terms in it.”

“We need to deploy these dollars into our economy: ramping up vaccines, getting our kids back in school safely and helping small business,” she continued. “And any effort to curtail how much of that is going to be spent, I think is, you know it’s shortchanging the people in Michigan.”

Whitmer’s office didn’t respond to a request to comment Wednesday afternoon about where she and the Republican-led Legislature stand in terms of negotiating the COVID-19 relief funds.

House Democrats offered a number of amendments to the three supplemental bills brought to the House floor, but most were not approved.

On the floor, Democrats argued that Republicans were playing partisan games by limiting the federal relief allocation and tie-barring spending bills to policy bills that do receive bipartisan support. Republicans argued that allocating the funds in full gives too much power to Whitmer’s administration and continued to push for restrictions on schools and businesses to be lifted.

The first bill taken up by the House, House Bill 4047, would provide $2.3 billion in supplemental funding to support businesses, to enhance direct care worker hazard pay and to make a base adjustment to the Food Assistance Program, but Democrats continued pushing for the full $5 billion. The Senate passed the bill on Tuesday.

“We have the tools that are available to do more and to speed this process up by providing the support our state needs right now,” Tate said. “If we have these resources, why wouldn’t we use them? Putting tools back in the box is a mistake we can afford to make right now. I think we can do better. … These are our tax dollars and this is an hour of need. So let’s bring this money home.”

The bill also states that Michiganders receiving a vaccine must be notified if fetal tissue or embryonic stem cells were used in the vaccine’s development, which Democrats may fear would hurt the state’s vaccination goals. That measure was backed by Right to Life of Michigan President Barbara Listing said in a statement Wednesday that the group “applauds pro-life leadership in the Michigan House and Senate for including this provision.”

On Tuesday, the Senate voted to tie-bar HB 4047 to Senate Bill 1, which would withhold the COVID-19 funding unless Whitmer signs SB 1, revoking the DHHS’ power to extend epidemic orders beyond 28 days without approval from the GOP-led legislature.

SB 1 will not be voted on in the House until next week due to a necessary five-day waiting period.

For nearly a year, Republicans in the Legislature have been fighting to strike down the Whitmer administration’s power to issue emergency orders throughout the pandemic. After suing the governor and overturning her ability to act under the Emergency Powers of the Governor Act, Republicans have continued to try and quash the administration’s powers through legislation during budget negotiations.

Rep. Thomas Albert (R-Lowell) said Whitmer “must change course immediately” because her COVID-19 restrictions “are crippling the foundation of our economy.”

“Your measures are not based on science, but are calculated on measures to retain power. The economic devastation that is being unleashed is significant. It is felt by our families and it is being hidden by a massive infusion of federal dollars,” Albert said on the floor Wednesday. “The greatest effect of your over the top measures is not improvement of public health, it is the loss of one’s dignity of being able to provide for one’s family and their community through work. To use a word from the governor’s statements on this relief plan, her actions have been just plain cruel.”

Whitmer has said her administration’s pandemic response has relied on epidemiologists’ recommendations and has invited lawmakers to take part in briefings.

During a press conference before the Wednesday’s House session, Minority Leader Donna Lasinski (D-Scio Twp.) said the Republicans’ plan is “irresponsible” and “kneecaps our ability to respond to the COVID-19 pandemic.”

“Every Michigander should know that Republicans are leaving their dollars in Washington, D.C. Not only that, the republicans are insisting that even to bring home the dollars they propose that the governor give up her ability to protect Michiganders, and if she does not, they will leave even more money in Washington, D.C.,” Lasinski said. “House Democrats stand firm on putting forth a substitute bill with no conditions, no strings to simply bring back every federal dollar to Michigan. And we must do that.”

On the school side of the supplemental package, House Bill 4048 would increases school spending via more federal COVID-19 funds to a total of $1.9 million, but is tie-barred to House Bill 4049 which would ban the DHHS from closing in-person instruction or high school sports, passing that power over to local health departments.

Rep. Brenda Carter (D-Pontiac) offered an amendment to HB 4048 which would break the tie-bar, but the amendment was not approved.

“Over the past several weeks, the discussions over this supplemental funding for our schools have felt more like a hostage negotiation with our children and teachers who have already been through so much this past year. They’re caught in the middle. Normally at times like these we use words like games, or pediatrics to describe our political process. But here and now, those words are insufficient because they negate the very real consequences of our actions here in this chamber,” Carter said on the floor.

HB 4048 also requires all districts to offer at least 20 hours of in-person instruction per week as of March 22.

“This legislation would apply a one-size-fits-all requirement for schools to offer in-person learning without any consideration for various varying circumstances throughout the state,” said Rep. Regina Weiss (D-Oak Park), a former teacher. “If schools are unable to make adjustments to accommodate these requirements within the next few weeks, they would stand to lose this vital funding. If students, parents and educators have already agreed to a plan that fits their needs and protects their safety, why should they be punished if it doesn’t fit this arbitrary timeline and arbitrary requirements?”

Separate from the supplemental package, the House also passed House Bill 4061, with a 63-47 vote, which would prohibit the public threat alert system to be used for announcements for a new law or executive order.

Whitmer has used this to inform residents of some pandemic actions and Republicans have been critical of that decision. 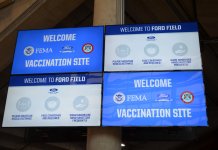