The state of Michigan has filed a motion for summary disposition against a lawsuit aimed at ending the state’s 6% sales tax on menstrual products and refunding people who menstruate.

The motion made last Friday comes even as Gov. Gretchen Whitmer last week proposed a Fiscal Year 2022 budget plan that includes a provision to end the “tampon tax,” as the Advance first reported.

The lawsuit, filed by three women, Emily Beggs, Clare Pfeiffer and Wei Ho, in the Michigan Court of Claims in August, states that the ‘tampon tax’ violates both the Michigan and U.S. Constitutions under the Equal Protections Act. The state of Michigan and the Department of Treasury are listed as defendants in the lawsuit.

Whitmer’s office did not respond to a request for comment and Attorney General Dana Nessel’s office declined to comment on the pending litigation.

Laura Strausfeld, co-founder of Period Equity, a national nonprofit that helped file the class action lawsuit against the state, expressed disappointment in the state’s motion.

“By failing to exempt menstrual products from sales tax, Michigan has an unfair, regressive, unconstitutional tax on its books. With female unemployment at record highs, the ‘She-Cession’ caused by COVID-19 has disproportionately impacted — and harmed — Michigan women, who need every available form of relief, including elimination of the tampon tax,” said Strausfeld. “We thank the bill sponsors for moving forward this important bill and call on the Legislature and Gov. Whitmer to join their counterparts — from both parties, in states from Ohio to Florida — to right this wrong.”

Meanwhile, after being tabled in the past, actions to put an end to the sales tax on menstrual products were reintroduced this week in the Legislature.

“With the start of a new legislative session, we must make it our priority to repeal the tax on feminine hygiene products once and for all,” said state Sen. Winnie Brinks (D-Grand Rapids). “This tax is a hardship for those who are already having difficulty making ends meet, and it’s something only those who menstruate are forced to pay. There should be no reason to maintain such inequity.”

Similar legislation has been introduced in years past, but has not been able to get support from Republicans who control the Legislature.

Whitmer shared her support for the legislation on Twitter Thursday.

Grateful to @MalloryMcMorrow, @WinnieBrinks, @repyancey, and @PadmaKuppaMI41 for introducing legislation to repeal the Tampon Tax and ensure women’s needs are tax exempt like any other medically necessary purchase in Michigan.

“I’m pleased to see the governor support our efforts to make women’s needs tax exempt like any other medically necessary purchase in Michigan,” McMorrow said. “What may seem like small change in taxes adds up month after month. Eliminating this tax burden will give women more spending power to put back into our economy.”

According to a 2019 fiscal analysis, Michigan brings in about $6.5 million from the sales tax on menstrual products annually. 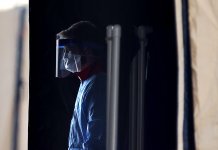 How the anti-COVID vaccine movement mobilized in Michigan before anyone ever...

How the anti-COVID vaccine movement mobilized in Michigan before anyone ever...