“Today is our city’s first step in truly getting past COVID-19,” Duggan said. “Detroiters have done a great job following the rules that have been established for them, such as wearing masks and social distancing.’’

On Monday, the city received its first shipment of 2,000 doses of the recently-approved Moderna COVID-19 vaccine. Those doses, Duggan said, will be used to vaccinate health department staff, home health care workers, staff and residents at assisted living facilities in the city.

Meanwhile, through a partnership with the city, workers from Henry Ford Health System will begin vaccinating Detroit’s EMS workers and firefighters, who are cross trained as medical first responders.

“Now they will get to have the opportunity to decide for themselves whether to take the vaccine,” Duggan added. “As we prepare to immunize our front line health care workers and medical first responders, we want everyone to know the vaccine is safe and how much confidence we have in it.”

The state’s plan for distributing the vaccine is broken down into four phases, the first three focusing on healthcare, medical and front line workers, as well elderly and vulnerable residents before beginning phase 4, which is the general population. Duggan expects the first phase to be complete in January.

Duggan said that the city will need to conduct 5,000 vaccinations a day in order to fight COVID-19 effectively in the state’s largest city. He pointed out that vaccine distribution stations could be set up at TCF Center, the city’s downtown convention center site and stadium parking lots like Comerica Park, home of the Detroit Tigers baseball team, and Little Caesars Arena, home of the Detroit Pistons basketball team and Detroit Red Wings hockey team. He also said that the city has identified the freezers necessary for the Pfizer vaccine, which must be stored at an average of 103 degrees below zero Fahrenheit to stay viable.

Some Black residents distrust the vaccine

Duggan, a former hospital system chief, acknowledged that city officials and others will have to sell a significant number of city residents on taking the Pfizer and Moderna vaccines. Some of that centers on the dubious history of Black men in the South being immunized for syphilis, a federal government-sponsored secret experiment during the 1930s. Conducted by the U.S. Public Health Service, the idea was to study the progression of the deadly venereal disease. The infamous study that has come to be called the Tuskegee Experiment initially involved 600 Black men, 399 with syphilis and 201 who did not have the disease, according to the Centers for Disease Control. Some of them thought they were being treated for rheumatism or bad stomachs. They were promised free meals, free physicals and free burial insurance.

Detroit is 79% African American. Nationally, less than half of Black people, 42%, say that they will take the vaccine, according to a national survey by the Pew Research Center conducted in late November. Conversely, 60% of Americans overall say they would definitely or probably get a vaccine for the coronavirus if it were available today.

The Rev. Wendell Anthony, an African American and Detroit NAACP president, has heard the concern of some Black residents have and he understands the skepticism. However, Anthony said that 2020 is significantly different from the 1930s and the Tuskegee Experiment. He pointed out that Black healthcare professionals like Dr. Joneigh Khaldun, Michigan Department of Health and Human Services’ chief medical executive and chief deputy director, are involved in critical ways. Khaldun was vaccinated for the virus on Thursday.

“Today with COVID, Black folks are involved with the research, the determination, the administration, the monitoring, and the application of the vaccine,” Anthony said. “I, personally, feel much more comfortable today than I would have felt back in the day.”

Anthony, who leads Fellowship Chapel, one of Detroit’s most influential church congregations, said that he and his family will take the vaccine as soon as it is available to them.

On the other hand, Jamon Jordan has personally been affected by coronavirus. His mother, Jacquelynne Jordan, contracted COVID-19 and died earlier this year. He had a bout with coronavirus himself. Jordan, an  African-American historian and Detroit resident, said because of “the history of federal government oppression of Black people,” the quick timing of the vaccine launch, and the fact that it comes during President Donald Trump’s administration, which downplayed the effects of COVID-19 for many months, he is skeptical.

“We haven’t yet made the decision on whether or not to get it when our time comes. At some point we hope that we are confident enough to take a vaccine,” Jordan said about his family. 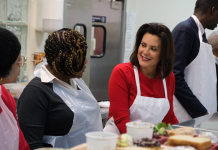