In just five days, a slate of pre-selected Michigan electors will convene at the state Capitol to cast their 16 votes as part of the Electoral College. Michigan certified its election results on Nov. 23, meaning that by law, all 16 electoral votes will go to Democratic President-elect Joe Biden.

As straightforward as that process may seem, right-wing, Hail Mary attempts to throw the system into turmoil are ongoing. On Wednesday, President Donald Trump was still tweeting to “#OVERTURN” election results and falsely claiming he won. Republican officials across the country continue to fan the flames of misinformation by signing onto lawsuits, refusing to condemn election conspiracies, declining to rule out coup-like strategies and even failing to answer basic questions about election results.

Attorney General Dana Nessel, a Democrat, summed it up this way on MSNBC Wednesday: “This post-election process has been like a ‘Friday the 13th’ movie, you know? … No matter how many times you shoot Jason or you stab Jason or you electrocute Jason, he just keeps on coming back at you, over and over and over again. And he just won’t stay down.”

Starting Friday, the Michigan Advance contacted the offices of all 80 Michigan Republican legislators about their stances on the election and legislative intervention. The questions, modeled after the Washington Post’s survey to congressional Republicans, were as follows:

Even after follow-up attempts, none of the Michigan GOP lawmakers in either chamber offered a response.

“It seems to me that whenever asked a question, it would benefit [lawmakers] to participate in the process of the First Amendment,” Michigan Press Association Public Affairs Manager Lisa McGraw said. “What is the harm, if you have a belief, in letting your constituents know that? If you believe in what you believe in, you shouldn’t have a problem saying it out loud or putting it in writing. If you believe the election was fraudulent, you should say it.”

The election was a month ago. 4 Michigan GOP congressmen won’t say who won the presidency.

Among those who didn’t respond to the Advance‘s inquiry are Senate Majority Leader Mike Shirkey (R-Clarklake) and House Speaker Lee Chatfield (R-Levering) and other GOP leaders who met with Trump at the White House last month.

GOP-led House and Senate Oversight committees have held multiple hearings in which GOP activists have rehashed allegations of election irregularities that have not been found credible in court. U.S. Attorney General Bill Barr also concurred that there was no widespread election fraud. Last week, Trump attorneys Rudy Giuliani — who called into the Michigan Republicans’ White House meeting — and Jenna Ellis testified and pressured lawmakers to defy Michigan election law and appoint pro-Trump electors.

The committees have already subpoenaed the Bureau of Elections for records and on Wednesday, Chatfield announced that the House next week will vote to authorize subpoena power for the Oversight Committee.

“There have been an unusually high number of allegations of fraud,” Chatfield tweeted. “No election evidence should be destroyed. Questions need to be answered.”

After requests from Chair Hall and others in caucus, next week the House will vote to authorize subpoena power for the Oversight Committee. There have been an unusually high number of allegations of fraud. No election evidence should be destroyed. Questions need to be answered.

Shirkey also said he was watching a case before the U.S. Supreme Court to overturn the election.

Michigan Republicans may be silent on reporters’ questions about the election, but many are vocal on social media and post about their desire to investigate baseless allegations of election fraud.

Twenty-three GOP House members also released a letter Wednesday rehashing unproven allegations about the election and asking for a “complete forensic assessment to the satisfaction of the adverse party,” conducted by a nonpartisan third party in the “most contested counties.” It also demands that no election materials are destroyed.

Last week, state Reps. Triston Cole (R-Mancelona), Alexander, Eisen and Sen. Roger Victory (R-Hudsonville) flirted with the idea that lawmakers could possibly intervene in the process of the electoral vote. Although, this is contrary to Michigan’s election law, which states that the state’s 16 electors must go to the candidate who won the popular vote in Michigan.

Sylvia Albert, director of the voting and elections program for the Washington, D.C.-based government watchdog group Common Cause, told the Advance Wednesday that Michigan Republicans are not the only state lawmakers avoiding accountability and leaving the door open for election conspiracies to fester.

“Michigan is not alone. This is happening nationwide,” Albert said. She added that other state legislatures have filed lawsuits to stop election certification, while Republicans in Pennsylvania recently penned a letter asking their congressional delegation to throw out all of the state’s Electoral College votes.

“It is hard not to overstate how damaging this is. We will not see the effects of this immediately; it is a constant eroding of democracy,” Albert said.

As of Wednesday, there are two primary lawsuits ongoing aiming to overturn Michigan’s election results. A third pro-Trump suit — Johnson vs. Secretary of State — was tossed Wednesday afternoon by the Michigan Supreme Court in a 4-3 decision.

The Trump campaign has appealed its suit to the Michigan Supreme Court after the state Court of Appeals rejected an appeal on Friday. Another lawsuit filed by former Trump lawyer Sidney Powell was appealed to the U.S. Court of Appeals on Wednesday. A U.S. District Court judge in Michigan had denied Powell’s motion for a temporary injunction on Monday.

That case also hinges on baseless allegations of widespread election fraud — as does the lawsuit brought about by Texas Attorney General Ken Paxton, who asked the U.S. Supreme Court on Tuesday to overturn Biden victories in Michigan and other key states. Seventeen other red states have joined him, as well as Trump.

Albert said these actions are a direct result of Trump undermining public faith in elections since he ran in 2016, but much more aggressively in the last six months.

“What he’s basically come down to is, ‘If you didn’t vote for me, your vote is fraudulent,’” Albert said. “It is damaging. What we’re seeing is polls that show something like 30% [38%] of Republicans believe that it’s likely that the president is going to overturn the election results. And even more truly believe that there was fraud, and that the president won.

“The Republican Party seems to believe that only the votes for them are allowed to be counted,” Albert said, adding that every case Trump associates have filed so far have been dismissed for lack of evidence.

As reported by MIRS Wednesday, Shirkey responded to the Texas lawsuit development by noting that he is “paying attention.”

“We’re still not at a point to consider reassessing electors, but this is something we must pay attention to,” Shirkey told MIRS.

When pressed by the Advance about what it would take for the Senate majority leader to start to “consider reassessing electors,” Shirkey spokesperson Amber McCann responded: “If compelled by court action.”

Before this response to the Advance, McCann sent an email to press members discussing details of when and where the state’s electors will convene to vote Monday in the Senate, noting that “details regarding the day are coordinated by the political party whose candidate won president and vice president, in this case that is the Michigan Democratic Party.” 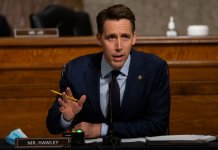