President-elect Joe Biden won Michigan by a margin of 154,000 votes and those results were certified by the Board of State Canvassers on Nov. 23.

Both Senate Majority Leader Mike Shirkey (R-Clarklake) and House Speaker Lee Chatfield (R-Levering) have publicly stated since then that they will follow the law and not obstruct Michigan’s slate of 16 electors from voting for Biden.

But several members of their GOP caucuses appear to not be so sure.

That includes state Reps. Triston Cole (R-Mancelona), Julie Alexander (R-Hanover), Gary Eisen (R-St. Clair Twp.) and Sen. Roger Victory (R-Hudsonville). As reported by the Detroit News Thursday, the lawmakers were somewhat evasive in answering whether they believe lawmakers could intervene in the process and left the door open for possible action.

Michigan Election Law states that the presidential candidate with the most popular votes will receive the state’s 16 electoral votes, to be cast by Michigan’s pre-selected electors on Dec. 14.

State law also clearly states that Michigan lawmakers do not play a role in the elector-appointing process, as the Advance has previously reported. Those duties are largely relegated to Secretary of State Jocelyn Benson and Gov. Gretchen Whitmer, both Democrats. Any attempt by legislators to assume duties that are not theirs could potentially result in criminal consequences.

However, outgoing GOP President Donald Trump, along with his personal lawyer, former New York Mayor Rudy Giuliani, has not let up on his quest to sow doubt in election results at both the state and national levels.

Giuliani appeared in Lansing on Wednesday to speak before the House Oversight Committee. That hearing turned into a bizarre spectacle of unfounded GOP conspiracy theories about widespread election fraud, and ended in Giuliani and Trump lawyer Jenna Ellis not-so-subtly asking lawmakers to intervene and select pro-Trump electors.

Giuliani this week also appeared in another battleground state, Georgia, to make his case. But on Friday, he seemed discouraged on Twitter.

“Republican Legislature let down America,” Giuliani tweeted Friday afternoon. “I’m ashamed of them. They completely misled the President and me.”

I’m ashamed of them.

They completely misled the President and me.

All of us Republicans let them know what we think of them.

When Cole, Victory, Alexander and Eisen were asked by the Detroit News whether they would rule out acting on Giuliani’s request, Cole signaled that he is “looking at the constitutional road map and what some of the options may or not be.”

Victory said he is “still exploring” the possibility.

Alexander was more evasive, and simply noted that she took an oath to uphold the Constitution. “I’ll leave it at that,” she said when pressed.

A statute in the U.S. Constitution technically allows broad discretion for legislators in the elector-appointing process, but Michigan Election Law specifically prohibits lawmakers from participating.

Eisen would only say that if there was proven fraud and things fell into place, “we may have input,” although he acknowledged that the chances of that were slim and the election is not likely to be overturned.

The Michigan Advance is in the process of contacting all Republican legislators about their stances on the election and legislative intervention. 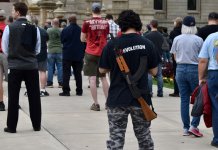 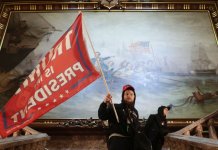