The Wayne County Board of Canvassers on Tuesday evening certified the Nov. 3 presidential election results, but also directed the Secretary of State’s office to do a comprehensive audit of precincts that had minor discrepancies in vote totals.

The vote came after the body first deadlocked along partisan lines, 2-2, with Republican members Monica Palmer and William Hartmann alleging irregularities in Detroit and alleging information recorded in Detroit poll books was not accurate.

Both initially voted against certifying the results, but changed their minds in a subsequent vote amid intense social media and national media scrutiny.

In wild meeting, Wayne Co. board certifies Biden as winner after GOP members initially blocked it

Shanay Watson-Whitaker of Detroit encouraged friends to participate in the Tuesday meeting that was carried out via Zoom. She believed that it was important that community voices were represented and heard.

“The racism involved in the initial decision was apparent. It was out there for everyone to see. I’m glad that people in the community did come together and did organize and rally to put this in the spotlight and have this situation overturned,” Watson-Whitaker said.

Detroit, which is 80% Black, is Wayne County’s largest city. President-elect Joe Biden, a Democrat, won Michigan over President Donald Trump by about 150,000 votes, according to unofficial returns. Under Michigan’s winner-take-all system, Biden is to be awarded all 16 electoral votes.

“Enough of the people were able to express themselves that the canvassers got the message,” Anthony said on Wednesday.

Anthony participated in the public comment section of the canvassing meeting and called its earlier vote against certification a “disgrace.”

“You have extracted a Black city out of a county and said the only ones that are at fault is the city of Detroit, where 80% of the people who reside here are African Americans. Shame on you!” Anthony said on Tuesday.

Detroit Mayor Mike Duggan pointed out on Wednesday that the Trump reelection campaign has focused primarily on Detroit in its post-election accusations and court filings.

“They don’t have a single Detroiter that they can point to who has voted who wasn’t eligible to vote,” said Duggan. “Not one. Five courts in a row have said that their claims are not credible and yet they persist in what they are trying to do.”

Anthony on Wednesday called for activists to remain vigilant and to participate in the state Board of Canvassers meeting on Nov. 23.

“We’re not going to let them steal the election,” Anthony said. 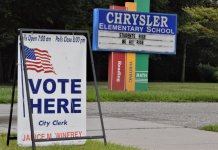 Detroit NAACP chief: ‘We’re not going to let them steal the election’