A recent study found that a majority of Michiganders support legal abortion.

Pew Research Center surveyed people from all 50 states to evaluate if abortion laws are congruent with voters’ views.

Of the people surveyed from Michigan, 54% said they believe abortion should be legal in all or most cases.

In 20 states, a majority of people support legal abortion, and of those 20 states, 16 states have not passed restrictive laws against abortion. However, Michigan is not one of those 16 states, meaning state law conflicts with the majority’s views on abortion in Michigan.

In 2019, seven states enacted anti-abortion laws, including Mississippi, Alabama, Kentucky, Ohio, Lousisiana, Missouri and Georgia, but not all these laws held up in court. 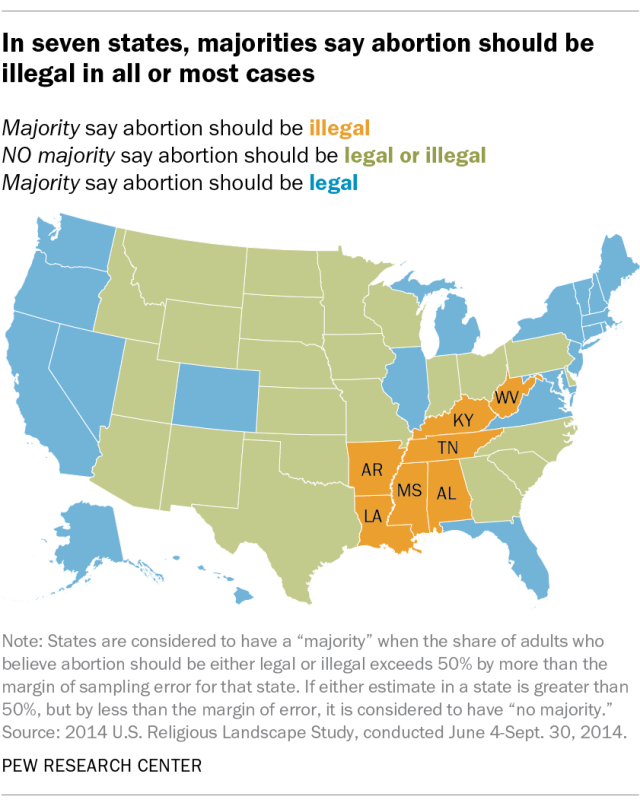 Two abortion restrictions failed to get traction in Michigan since 2019.

In May 2019, the Michigan Legislature passed bills that would ban the dilation and evacuation (D&E) abortion procedure, and Democratic Gov. Gretchen Whitmer promised to veto the bills once they reached her desk.

To skirt the veto, Right to Life decided to launch a ballot measure. Under Michigan law, if a petition receives enough signatures, it goes before the Legislature for approval before voters. The GOP-controlled Legislature was seen as likely to approve it and the governor is unable to veto such measures.

In July, Right to Life of Michigan, a group working to ban the D&E procedure, ended its Michigan Values Life petition drive after the Michigan Bureau of Elections (BOE) said the petition did not have enough valid signatures.

Another anti-abortion petition drive was the Michigan Heartbeat Coalition’s proposal to ban abortions at the first sign of cardiac activity, usually within the first six to eight weeks. The coalition didn’t file its signatures within the required timeframe.

In Michigan, there are currently a number of restrictions on abortion.

The Legislature in 2013 approved a law that says health plans offered in the state’s health exchange under the Affordable Care Act (ACA) only cover the costs of abortion in cases of life endangerment, unless individuals purchase an optional rider at an additional cost, and funding through Medicaid is only available for abortion in cases of life endangerment, rape or incest. Whitmer, who was senate minority leader at the time, led the opposition against the measure.

The state also requires women to get counseling on supposed negative psychological effects of abortion, followed by a 24-hour waiting period before the procedure is provided.

There also are limits on when procedures can be performed in Michigan. Abortions may only be performed at or after the fetus’ viability if the patient’s life is at risk by the pregnancy.

Reproductive rights are on the forefront of many people’s minds after conservative Judge Amy Coney Barrett was confirmed to the U.S. Supreme Court on Monday.

Stabenow said she voted no on the appointment because “Barrett does not stand on the side of people. She does not represent mainstream values – the values we cherish in Michigan.”

Barrett’s nomination was celebrated by anti-abortion groups and abortion rights supporters are concerned that Barrett will roll back the 1973 Roe v. Wade decision, which gave Americans the constitutional right to abortion at least in the first trimester of pregnancy.

Within the last 10 years, states have adopted more restrictive abortion laws. Many anti-abortion supporters are hoping that the Supreme Court will take up one of the many challenges to state laws, leading to a conservative U.S. Supreme Court overturning the landmark decision or severely restricting abortion.

If Roe v. Wade is overturned in the Supreme Court, the power to decide whether or not abortion is legal will be in the hands of state lawmakers. In Michigan, the state would fall back to its last abortion law from 1931, which made any abortion a felony unless the woman’s life was at risk.

Nationally, 61% of Americans support legal abortions in all or most cases according to the Pew Research Center study.

There are only seven states — West Virginia, Kentucky, Virginia, Alabama, Missouri, Arkansas and Louisiana — where the majority of people say abortion should be illegal.