Far-right conspiracy theorists and political operatives Jacob Wohl and Jack Burkman were arraigned Thursday in a Michigan court on felony charges of orchestrating robocalls to deter voters from engaging in the upcoming Nov. 3 general election.

Wohl and Burkman pleaded not guilty to the felony charges. Nessel in early October filed the charges against them after her office investigated the robocalls, which targeted Black voters in Detroit in late August.

The two each face the following charges:

Nessel’s office worked with attorneys general in New York, Pennsylvania, Ohio and Illinois on the investigation. Each state experienced robocalls, with about 85,000 calls made nationally.

The woman speaking in the robocall claimed personal information of people who vote by mail will become part of an unspecified public database. The call falsely claimed that voting by mail will allow law enforcement officials to track down old warrants and credit card companies to collect outstanding debts.

It also claimed the Centers for Disease Control and Prevention (CDC) would use personal information to track people for mandatory vaccines, a conspiracy theory that’s been more aggressively peddled since the onset of the COVID-19 pandemic. The woman ends the call by telling voters to “beware” of voting by mail. 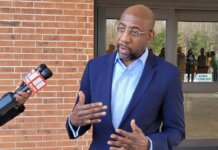