Michigan Secretary of State Jocelyn Benson and Michigan Attorney General Dana Nessel issued a stark warning for people who attempt to vote more than once in the upcoming Nov. 3 general election.

Benson and Nessel — the state’s top election and top law enforcement officials, respectively — said Thursday that anyone who casts more than one ballot will be prosecuted.

The two Democrats were responding to President Donald Trump, who suggested to a group of supporters in North Carolina that they should cast two ballots to ensure their vote is counted. He told voters to cast a ballot by mail, then go to a polling location and, if the mail-in ballot hasn’t been counted, then vote in-person.

“If you get the unsolicited ballots, send it in, and then go — make sure it counted. And if it doesn’t tabulate, you vote. You just vote,” Trump said, according to NPR. “And then if they tabulate it very late, which they shouldn’t be doing, they’ll see you voted, and so it won’t count. So, send it in early, and then go and vote. And if it’s not tabulated — you vote. And the vote is going to count.”

Based on the massive number of Unsolicited & Solicited Ballots that will be sent to potential Voters for the upcoming 2020 Election, & in order for you to MAKE SURE YOUR VOTE COUNTS & IS COUNTED, SIGN & MAIL IN your Ballot as EARLY as possible. On Election Day, or Early Voting,..

…..go to your Polling Place to see whether or not your Mail In Vote has been Tabulated (Counted). If it has you will not be able to Vote & the Mail In System worked properly. If it has not been Counted, VOTE (which is a citizen’s right to do). If your Mail In Ballot arrives….

….after you Vote, which it should not, that Ballot will not be used or counted in that your vote has already been cast & tabulated. YOU ARE NOW ASSURED THAT YOUR PRECIOUS VOTE HAS BEEN COUNTED, it hasn’t been “lost, thrown out, or in any way destroyed”. GOD BLESS AMERICA!!!

But that’s not at all what voters should do, the two Michigan officials said.

“Let me be perfectly clear: voting twice is illegal, no matter who tells you to do it. The president’s idea is a great one for people looking to go to jail,” Nessel said. “My office will prosecute to the fullest extent of the law anyone who intentionally flouts our election laws.”

In Michigan, voter fraud is normally prosecuted as a felony, Nessel said. In 2019, a city clerk in Southfield was charged on six felony counts for altering 193 absentee voter records following the November 2018 election.

Lawmakers in the state have recently been looking at legislation to classify voter fraud as a felony offense.

“Our election system has been stress-tested by three successful elections already this year and in all of them proven that it is absolutely safe and secure,” Benson said. “We have protections in place to ensure election officials track and verify every ballot they send and receive and in every instance we ensure that each person gets only one vote.”

Trump, a vocal critic of mail-in voting because he says, without evidence, that it helps Democrats, accused Benson via tweet of sending absentee ballots to Michigan voters. But Benson’s office sent absentee ballot applications, not ballots themselves. Trump later deleted his tweet and issued a second one that criticized the applications.

Benson reminded the president that Michigan voters in 2018 approved Proposal 3, which added several voting policies to the state Constitution, including no-reason absentee voting.

Sending out the ballot applications was criticized by some Republicans in the GOP-led state Legislature. State Sen. Ruth Johnson (R-Holly), a former secretary of state, said Benson had taken unilateral actions “with no input and questionable motivations.” Meanwhile, a spokesperson for state Senate Majority Leader Mike Shirkey (R-Clarklake) said sending out applications was an “unnecessary expense.”

But a state Court of Claims judge ruled in August that Benson acted within reason in sending those applications and found Benson’s decision superseded local election clerks’ decisions. 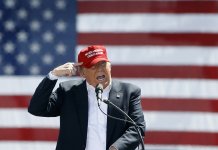 SOS, AG warn against taking Trump’s felonious advice to vote once more than once