About three months have passed since millions of college students graduated college into the worst economic downturn since the Great Depression.

Some have had to look for jobs unrelated to their degrees, while others changed their plans or decided to take a year off before going to graduate school or moving to where they had initially planned.

The overall unemployment rate in June was 11.1%, according to the U.S. Bureau of Labor Statistics. In Michigan, the rate that month was 14.8%.

One in four young adult workers are unemployed in the COVID-19 recession, according to the Pew Research Center. Additionally, the unemployment rate among 16- to 24-year-old workers was more than double the rate among workers 35 and older in May, the study said.

With many Americans still filing for unemployment and the labor market taking a huge hit since the COVID-19 pandemic began, recent college graduates continue to be uncertain about their early career paths.

An unexpected end to college

Michigan State University announced in early March that all in-person classes for the spring 2020 semester would be suspended and moved online.

Melissa Henning, 21, graduated from MSU in May with a degree in nutritional sciences. Once her roommates moved out of their off-campus apartment, she went back home to Midland.

She said she hasn’t seen her friends in a long time, and never got a proper goodbye.

“It doesn’t really feel like I’m done with school yet,” Henning said. “We just kind of got sent home from class one day and that was it.”

Caleb Hogeterp, 22, who graduated from the University of Michigan this spring, said he remembers talking to the Michigan Daily — the university’s school paper — in March after it was announced that MSU was canceling in-person classes. The paper asked what his reaction was to the pandemic as a public health major.

He said he wasn’t at all surprised that things were beginning to be shut down. At the time, he was disappointed that U of M hadn’t canceled in-person classes, as well.

“I think that, because I graduated with a bachelor’s in public health, it kind of gave me a unique perspective because it’s what I’ve been learning about for the past couple of years,” Hogeterp said. “It’s kind of a weird feeling to see the things you’ve been educated about coming to play at a really big moment.”

Tanner Evans, 22, had two large capstone projects that were cut short once classes went remote. He had to modify his projects, including a short film.

Evans, who graduated from MSU this spring with a degree in media and information, said there were two shooting days left for the film before the semester was cut short.

“We all just kind of got sent home right at the most crucial time, so it was definitely an interesting experience — figuring out how to work remotely in such a collaborative situation,” Evans said. “We had those two shoot days left, and those contained three of our most important scenes. So we had to completely disassemble all of the story we had and try to just cut it together into something else… It’s a completely different film than it was.”

Just a few weeks after classes transitioned to online, it was clear that college seniors were about to graduate into a looming recession.

Naomi Caridad, 23, graduated from Eastern Michigan University in the winter of 2019 with a bachelor’s in speech/language pathology. A few months later, she tested positive for COVID-19. Then the daycare she works at shut down from March until June.

Caridad said, at first, she didn’t think much about the symptoms she was having because she usually gets sick every spring. However, after her roommates suggested she get tested for COVID-19, she found out that she had it.

“When I got the call that I tested positive, my world stopped,” Caridad said. “I was grateful I was out of school because I didn’t want to be a headline title.”

She said she was glad to have had a mild case. She self-isolated for about two weeks until she got better — watching Netflix, listening to music and finding ways to keep herself busy.

After having COVID-19, Caridad says she lives life as normal, with a few extra precautions such as wearing masks, using hand sanitizer and checking her temperature. She said these are just a few steps everyone can take to ensure people’s safety.

“If it weren’t for the stimulus check [from the federal government] and all the unemployment benefits, I would be in a very tight financial place,” she said. “Like, I don’t even know if I would be going to grad school.”

Now, she works about two days a week at the daycare that has reopened.

This will be her last job before she goes to graduate school in the fall. She said she’s sad that she’ll never get a proper goodbye with some of the kids she’s worked with during her time there.

Michael Richardson, 24, graduated from Central Michigan University with a bachelor’s degree in psychology this spring. He said he’s had to think outside of the box when it comes to finding job opportunities.

Richardson has had to consider jobs that aren’t at all in his field of study, as well as jobs that can be temporary until the job market gets better.

“The pandemic has influenced the type of jobs I’m willing to do,” Richardson said. “Initially, I was only looking for career paths related to my major, but I’ve been forced to consider ones unrelated.”

“Job search-wise, nothing has worked out yet,” he said. “I’ve had a couple of interviews but nothing viable has come through.”

Henning also has had difficulty finding a job after graduation. Her plan was to find a job in the health field to get more experience and more patient care hours for school.

“I had so many interviews and applied to so many jobs and nowhere was really hiring,” Henning said.

For now, she’s working at a nursing home in her town, picking up shifts whenever someone calls in. She’s also decided to take a gap year before attending grad school next fall.

She said she’s lucky to be at home for the time being. This way, she doesn’t have to worry about expenses such as rent.

Although Hogeterp was filling out applications during the school year, he really started actively applying for jobs in March. He thought it would be easier to find job opportunities in his field after graduation.

“The job hunting process was just a lot more discouraging than it would have been, I think,” Hogeterp said. “I don’t feel like I got to fully explore my options how I would’ve wanted to.”

About five months later, he found a job doing behavioral health-related research for a university. If it weren’t for the pandemic, he would be going to Wisconsin, but he’ll be working remotely for now.

Evans was supposed to move to Los Angeles to pursue film after graduation. Since everything shut down, however, he moved back home to Boyne City.

“It hasn’t really been so much of a struggle as it has been just complete surrender to it,” Evans said. “All of Los Angeles — and the television and film industry as a whole — is just shut down.”

Although he couldn’t find a job related to his degree, he has been working a retail job to make money while also working on pre-production for films and creating content of his own — such as making vlogs.

“It’s an unfortunate way to end college, but it could be a very exciting way to begin my career,” he said.

Daniella Diaz, 22, has one more semester left of nursing school at EMU. She said she’s worried about getting experience before she graduates and officially goes into the field.

Her plan was to get a nurse externship — a program that allows nursing students to explore their interests and get practice in the field before graduating — back in February or March. But due to the pandemic, she said she wasn’t able to.

“Now that I only have about four months of school until I graduate, it’s just kind of unrealistic at this point,” Diaz said.

Diaz’s plans have shifted from finding an externship that would prepare her for her career in nursing, to looking for graduate nurse positions.

“I’m basically going to graduate school having never really done the job as a nurse, outside of our clinical hours,” she said. “I’m graduating and I’m going straight into my career.”

In-person clinicals for the fall are up in the air, she said. This worries her because she says the last semester of nursing school is vital, as students take care of patients on their own.

“The fact that we might not even get that is — it’s really concerning and it’s difficult because I feel like I’m just not getting the experience that I’m paying for,” she said. “It’s very different than being in the hospital and taking care of patients by yourself.”

“I just feel like I’m ill-prepared to start my career,” she said. “And if we do get a second wave, as a new nurse, you’re going to be the person they throw out to the frontlines first because you’re younger, you’re healthier.”

Hogeterp said it’s important for recent and upcoming graduates to have self-love and an understanding that difficulties finding a job during the pandemic doesn’t reflect badly on them or their skills.

“I think that it’s kind of safe to say that most people who are graduating right now know that it kind of sucks,” Hogeterp said. “I think it was important to have a lot of grace and empathy with myself when I was applying for stuff just because things are bad.”

Richardson said the advice he’d give to recent graduates is to do the best they can, and to know that it’ll all work out in the end.

“Take everything with a grain of salt. Be really flexible because no one really knows what to expect going forward,” Henning said. “Even though this isn’t maybe what you envisioned doing, just kind of try to make it work until something changes or a job opening opens up.”

Caridad said her advice is to try to keep an open mind because “there was no disaster plan book for this.”

“You could say that you started your career in the midst of a pandemic and maybe it made you a better worker, or maybe it didn’t,” Caridad said. “I think optimism is key in this situation.” 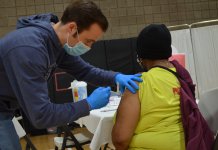