Nolan requested that Smolenski, who presides over Grand Rapids’ 63rd District Court, abide by the teachings of the Roman Catholic church and not take communion because she is married to a woman. Some churches have taken similar action against leaders who support abortion rights.

“It felt like being invited to someone’s house for dinner, but you can’t eat the food,” Smolenski said.

After local media covered her marriage to Linda Burpee, Smolenski did not expect her sexual orientation to be an issue in her home parish. During an interview with WOOD-TV, Nolan said Catholic teaching gave him no choice in making his decision.

Since that phone call, Smolenski’s story of discrimination reached local and national media outlets. She also faced responses from people who accused her of going to the media.

“I never called the media, but when they reached out, I chose to speak out,” Smolenski said.

In response to Nolan’s decision, some parishioners wrote a letter urging the community to write to Grand Rapids Bishop David Walkowiak and Detroit Archbishop Allen Vigneron.

“The St. Stephen community is experiencing a crisis of leadership involving selective discrimination against gay parishioners … these acts have been destructive to the culture of inclusion and diversity that are hallmarks of St. Stephen,” the letter read.

Smolenski said there were other parishioners who didn’t question the incident. St. Stephens also kept mailing parish contribution envelopes to Smolenski’s home, even after she and her spouse stopped attending mass. Nolan didn’t respond to a request for comment for the story.

“For months, I was so sad,” Smolenski said. “I’m still very sad about it. I stopped going to St. Stephens because it makes me feel too sad. Then I became angry. Now I think I’m past the anger because I know that’s not how all priests feel.”

Moss on LGBTQ Pride Month: ‘I’m begging for respect in the chamber’

“I found it so disappointing that someone would experience such discrimination in their spiritual home,” Roe said. “I’m not Catholic, but I understand Catholics to be deeply rooted in tradition; it’s embedded in your identity and your family’s identity.”

Roe also reflected on the vulnerability and ripple effects of someone in the public sphere experiencing discrimination because of their identity.

“For anyone who has experienced any kind of trauma in their life, there are different things that can trigger it. With Sara’s situation, whether you’re Catholic or not, I think it stirred up a lot of trauma, specifically experiences of rejection or discrimination, for a lot of people in our church and the spiritual community,” Roe said.

As much as the last six months have dampened her spirits, Smolenski’s faith remains unshaken. Depending on how the COVID-19 pandemic progresses, when churches begin opening their doors again, she is unsure about what church she will call home.

Poll: 74% back proposed LGBTQ anti-discrimination law, including most Republicans

Despite the Catholic church’s theological understanding that same-sex marriages live in opposition of biblical teachings, Smolenski continued attending the church she was baptized and raised in because it fit for her.

“I grew up in that church. It helped form my faith. I never had a priest tell me I wasn’t welcome or could not be a part of the church because of I was gay,” Smolenski asserted.

This incident also further solidified her doubts regarding the Catholic church’s institutional view on who is worthy of communion and by extension, God’s love.

“It’s not perfect; I’m not perfect,” Smolenski said. “When that priest told me I couldn’t have communion, I really felt like I knew what discrimination meant. It becomes personal when someone says you aren’t welcome.”

As a Catholic, Smolenski chooses to believe in the Christian teachings that God does not make mistakes and Jesus loves and accepts all people, regardless of sexual orientation, race, or background.

“I’m not ashamed of who I am; I’m proud. Jesus doesn’t make mistakes, so none of us were born as mistakes,” Smolenski said.

Though hurt by the incident, Smolenski felt encouraged by the support from her community and across the country. She even received an invitation from a Catholic church in Ireland.

“A man named Angus from Ireland wrote me a letter telling me I was welcome to his village’s Catholic church anytime,” Smolenski said. “I kept a notebook full of hundreds of notes, emails and handwritten letters of support. They were so powerful.”

Today, Smolenski questions the Catholic church’s discrimination, arguing that it excludes God’s children from practicing their faith in their church community.

“How can this rule be applied so discriminately? Why are the rules different from one church to another, priest to priest,” Smolenski said.

Earlier this month, the Detroit Archdiocese fired Terry Gonda, St. John Fisher Catholic Church’s music director, for being married to a woman. According to the Detroit Free Press, her firing occurred nine days after the U.S. Supreme Court granted federal job protections for LGBTQ employees, although churches are exempt.

Given the increased progressive activism during the Trump era and the Black Lives Matter movement’s increased visibility, Smolenski reflected on her role in creating change and challenging institutional discrimination.

“We have to use our voice, especially white people, because that’s how change is going to happen with any form of discrimination,” she said. “We need to do what is right and I don’t think that’s what the Catholic church is doing.” 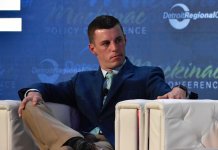