Michigan will be under a state of emergency and disaster for coronavirus until July 16.

Gov. Gretchen Whitmer on Thursday signed Executive Order 2020-127, noting almost every state in the country has maintained a state of emergency. This executive order allows Whitmer to continue taking emergency actions during the pandemic, although she has gradually been rolling orders back.

On June 1, Whitmer lifted the stay-home order. Michigan has seen a marked decline of COVID-19 cases and deaths since April and now stands at roughly 60,000 cases and 5,800 deaths.

The COVID Act Now model has Michigan as one of only three states at “low risk” for coronavirus, as the Advance previously reported. An Imperial College COVID-19 Response Team report also shows Michigan might have experienced 28,000 more positive cases before June 1 without aggressive intervention.

Michigan 1 of only 3 ‘low risk’ states for coronavirus

“The aggressive measures we took at the start of the COVID-19 pandemic have worked to flatten the curve, but there is still more to be done to prevent a second wave,”Whitmer said. “We owe it to the heroes on the front lines to keep doing our part by wearing a mask when in public and practicing social distancing. Now is not the time to get complacent. We must continue to stay vigilant and flexible in order to reduce the chance of a second wave.”

Under Whitmer’s plan for reopening, retailers, restaurants, salons and more are now allowed to operate. The Upper Peninsula and the region surrounding Traverse City now can have movie theaters, gyms and bowling alleys open.

Whitmer said if current trends continue, those services can restart in the rest of the state by July 4.

However, Whitmer did note in her E.O. an uptick in cases and deaths in other states and warned about the strain that out-of-state travelers might put on rural areas.

“The concern is especially acute because Michigan’s more rural counties will see an increasing number of out-of-town visitors this summer,” she wrote. “The residents of these rural counties are among the most vulnerable to COVID-19, with older populations and rates of chronic illness among the highest in the state. Twenty-one of Michigan’s eighty-three counties — all rural — have a median age over 50, and nearly 30% of Michigan’s rural population is 65 or older. These rural areas tend to be miles away from larger hospitals with the personnel, beds, and equipment to fight this virus.”

The governor issued her first state of emergency declaration on March 10, the date that the first two COVID-19 cases were confirmed in Michigan. She has extended that several times, despite pushback from the GOP-led Legislature, whose leaders wanted the state to reopen earlier. A Court of Claims judge last month affirmed Whitmer’s right to use her emergency powers.

In her new order, she cited the Emergency Powers of the Governor Act of 1945 as giving her the authority to extend the disaster and emergency declaration.

“Statewide coordination of these efforts is crucial to creating a stable path to recovery,” Whitmer wrote at the end of her order. “Until that recovery is underway, the economic and fiscal harms from this pandemic have been contained, and the threats posed by COVID-19 to life and the public health, safety, and 4 welfare of this state have been neutralized, statewide disaster and emergency conditions will exist.” 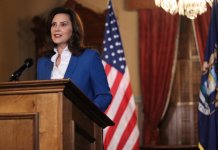 In State of the State speech, Whitmer offers GOP olive branch after they spent day trying to stymie her powers 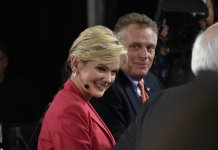 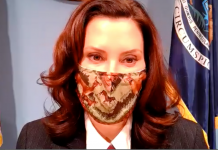