WASHINGTON — Hundreds of civil rights organizations, including some based in Michigan, urged U.S. congressional leaders to quickly pass legislation to address police killings of Black people in the wake of a series of recent deaths that have ignited protests around the country.

“In recent weeks, the chronic structural issue of police killings against Black people across our country has, again, escalated to a boiling point,” the groups wrote in a letter sent to congressional leaders on Monday. It was signed by the Leadership Conference on Civil and Human Rights and about 400 other groups.

They pointed to the deaths of Ahmaud Arbery in Georgia, Breonna Taylor in Kentucky, Dreasjon “Sean” Reed in Indiana, George Floyd in Minnesota and Tony McDade in Florida. Outrage over the recent killings has sparked massive protests throughout the country.

But those incidents are only some of the recent examples of long-standing problems, and the political response must be expansive, they said.

“Abusive police practices coupled with devastating state-sanctioned violence have exacted systemic brutality and fatality upon Black people since our nation’s founding,” the groups wrote. “For too long, the cycle of police brutality and racism has been met with cosmetic tinkering instead of substantive structural change.”

Michigan groups signing on to the letter include ACCESS and Michigan Coalition to End Domestic & Sexual Violence, as well as several organizations with chapters in the state, including the NAACP, League of Women Voters and Indivisible.

The organizations laid out a series of legislative efforts they want Congress to pass swiftly. They include requiring a federal standard that use of force be reserved as a last resort, banning all maneuvers that restrict the flow of blood or oxygen to the brain, prohibiting racial profiling and barring the use of no-knock warrants.

“In response to multiple instances of police violence, protestors are gathering across the country to demand an end to racist policing and violence, and accountability for those responsible. Police are responding to protestors with brutal crowd control tactics, including shooting rubber bullets and pepper spray into crowds of unarmed civilians,” they said.

“We must heed the call of protestors to dismantle structural racism and the racist institutions carrying out agendas rooted in white supremacy. In this moment of crisis, we … are committed to following the lead of grassroots movements organizing on the ground to demilitarize the police, end mass incarceration, and dismantle racist institutions. People are demanding to be heard and meaningful action must follow.”

U.S. House Speaker Nancy Pelosi (D-Calif.) said last week of Floyd’s death in Minneapolis: “To watch Mr. Floyd be murdered in a video, at a time when we’re all so sad to begin with.  It’s always tragic. It has always been tragic. But there we saw it on TV, him being murdered on TV.”

The U.S. Senate’s top Democrat, Chuck Schumer of New York, said that his Democratic colleagues will be preparing legislation to address police violence. “We must reform our laws and our police practices so that events like George Floyd’s killing are far less likely in the first place,” he said Monday on the Senate floor.

Schumer called on Senate Republican leadership to hold a vote on law enforcement reform legislation before the Fourth of July.

But Senate Minority Leader Mitch McConnell (R-Ky.) will ultimately decide whether any such legislation comes to the floor for a vote.

McConnell on Monday called for “swift justice” and condemned recent police killings that appear to be “the latest chapter in our national struggle” to maintain equal justice and equal protection under the law.

He also urged state and local authorities to “work quickly to crack down on outside agitators and domestic terrorists and restore some order to our cities.”

LG Gilchrist on Floyd protests: ‘To everyone who feels unheard, I hear you’

President Donald Trump on Monday called protesters “terrorists” in a call with governors, according to audio obtained by the New York Times. “You have to dominate,” he told governors on the call. “If you don’t dominate, you’re wasting your time — they’re going to run over you, you’re going to look like a bunch of jerks.”

Illinois Democratic Gov. J.B. Pritzker confronted Trump over what he called the president’s “inflammatory” language, the Times reported. “We have to call for calm,” Pritzker said. “The rhetoric that’s coming out of the White House is making it worse.”

“It was galling because we are at a point in time where people need hope and unity and a strategy to pull people together and save lives, and I’m frustrated because what we see is rhetoric that feeds into that anxiety, that understandable exhaustion that my African-American friends talk about every time they talk — exhaustion is the overwhelming word that people use,” Whitmer said. 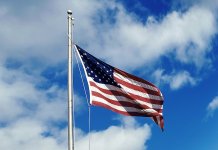