Protests rocked major cities across the country again on Saturday, including Detroit, as thousands gathered to voice their anguish and frustration about George Floyd, a 46-year-old African-American man who died after a Minnesota police officer pinned him down with his knee on his neck.

Detroit NAACP President Wendell Anthony has characterized Floyd’s killing as a “cold-blooded murder.” Fired Minneapolis police officer Derek Chauvin, who is white, was arrested Friday and charged with third-degree murder and manslaughter, some four days after the incident.

Lt. Gov. Garlin Gilchrist reached out to Michiganders in a video message Saturday.

Gilchrist is a Detroiter and the first African-American lieutenant governor in Michigan history. Criminal justice has been one of his major policy priorities since taking office in 2019.

“Let’s stand tall together,” Gilchrist continued. “Let’s walk forward together from exhaustion to expedited equity and change for all of our communities. Thank you and God bless you.”

“People in communities of color across the nation and right here in Michigan are feeling a sense of exhaustion and desperation. Communities are hurting, having felt that calls for equity, justice, safety and opportunity have gone unheard for too long. We stand in solidarity with those who are seeking equitable justice for everyone in our state. We can’t live in a society and a country where our rights and our dignity are not equal for all,” they said.

There have been several right-wing protests at the Capitol over Whitmer’s emergency actions to fight the COVID-19 pandemic. Whitmer affirmed their right to protest, but stressed the need to follow health guidelines for social distancing. She and Gilchrist expressed the same sentiment Saturday.

“The First Amendment right to protest has never been more important, and in this moment when we are still battling a killer virus, it is crucial that those who choose to demonstrate do so peacefully, and in a way that follows social distancing guidelines to protect public health,” they said.

As on Friday, the formal Detroit protest was peaceful until nightfall. Police broke up protesters with tear gas and rubber bullets. Detroit police arrested 21 people, the Detroit News reported. There were protests elsewhere in Michigan, including Grand Rapids and Flint Township.

Detroit civil rights leaders said suburbanites were to blame for violence, according to the Detroit Free Press.

“These outsiders put our community in harm’s way,” said the Rev. Charles Williams of the Michigan Chapter of the National Action Network.

State Sen. Mallory McMorrow (D-Royal Oak) called out those coming to Detroit from the suburbs to cause violence.

“To my fellow Metro Detroit suburbanites: don’t. Don’t go to Detroit to riot and damage property,” she wrote on Twitter Saturday. “Because you get to go home at night and the Detroit residents you claim to be allied with wake up to deal with the damage.”

To my fellow Metro Detroit suburbanites: don't. Don't go to Detroit to riot and damage property. Because you get to go home at night and the Detroit residents you claim to be allied with wake up to deal with the damage. 1/ https://t.co/uC6tO9pmZH

Other leaders across the nation, such as U.S. Rep. Karen Bass (D-Calif.), expressed concern about white people coming from outside cities and engaging in violence.

“To the white allies and supporters of this movement in the streets: Thank you,” Bass wrote on Twitter Saturday. “To the white rioters and agitators using the pain of this movement as cover to trash our communities: Get out. If you’re mad, if you’re distraught, if you’re angry, if you’re hurting: fight back against the system that killed George Floyd, don’t destroy our communities and neighborhoods. They want to see us burn. Don’t do their work for them. We have to build. We have to survive.”

If you’re mad, if you’re distraught, if you’re angry, if you’re hurting: fight back against the system that killed George Floyd, don’t destroy our communities and neighborhoods.

They want to see us burn. Don’t do their work for them.

Police have arrested more than 1,400 people in protests in 17 cities since Thursday, the Associated Press reported. Police engaged in violence in several incidents caught on video across the nation, including Salt Lake City police pushing over an elderly man with a cane and a New York Police Department vehicle driving through protesters assembled.

President Donald Trump didn’t cite that incident, but after it occurred he did tweet out, “Let New York’s Finest be New York’s Finest. There is nobody better, but they must be allowed to do their job!”

Trump started out Saturday morning with several tweets about Friday’s protest and announced Saturday was “MAGA NIGHT AT THE WHITE HOUSE.”

The professionally managed so-called “protesters” at the White House had little to do with the memory of George Floyd. They were just there to cause trouble. The @SecretService handled them easily. Tonight, I understand, is MAGA NIGHT AT THE WHITE HOUSE???

There were many reports of police targeting journalists with violence and arrests as they were trying to report on protests in cities across the country. A freelance journalist from Tennessee lost her eye after police shot her with a rubber bullet in Minneapolis and a WCCO photographer was arrested.

“We were yelling ‘Media!’ and showing our press passes. They shot at us anyway,” Jesse said, as reported in the Free Press. 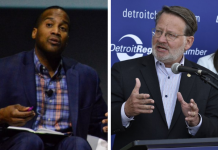 Michigan’s U.S. Senate race clocks in at 5th most expensive in the country

LG Gilchrist on Floyd protests: ‘To everyone who feels unheard, I hear you’