Home Biz + Labor Business The COVID-19 crisis has rocked Detroit and my life. But it’s also... 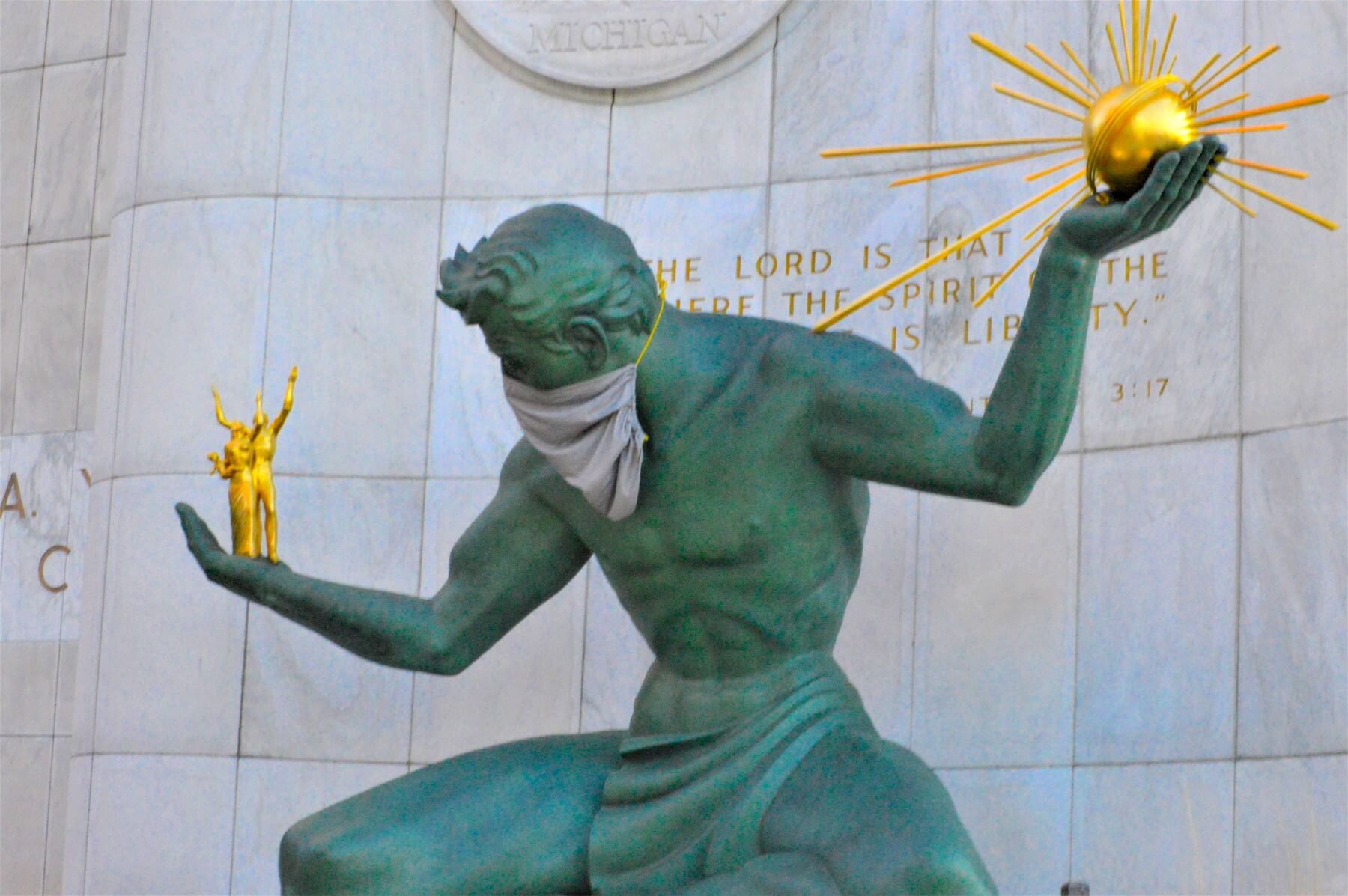 The last three weeks have felt like three years.

Sunday was Easter, but instead of donning a crisp suit, a bright pastel-colored tie, shiny dress shoes and going to service at Hartford Memorial Baptist Church, I was still rocking that same Detroit Pistons warm-up jacket, T-shirt, track pants and five o’clock shadow I’ve been sporting for many of the last 21 days. My wife, Kim, my son, Jackson, and I watched Easter service via the internet while huddled in bed.

It’s life in Detroit amid the COVID-19 crisis: The new normal.

My daily routine consists of staying glued to local and national cable news to catch important coronavirus updates, and helping to supervise Jackson’s online education assignments because face-to face instruction at his school is prohibited, as it is in all 83 counties of the state.

At some point each day, I go out for a jog to keep from going stir crazy. All the while, my wife and I, who are both working from home, update each other continually on what I call the Coronavirus Chronicles — social media posts and phone calls and texts about who’s contracted COVID-19 and who’s died because of it.

There’s no escaping the fact that Black Michigan has been hit hard by COVID-19. In fact, the state reports that 33% of the state’s confirmed cases are African American and account for 40% of deaths. Yet Blacks compose only 14% of the state’s population. It could be even worse than we know. In 51% of Michigan COVID-19 confirmed cases, the ethnicity of the person is unknown. Similarly, in 40% of deaths ethnicity is unknown.

Detroit Mayor Mike Duggan said Friday that 43% of the 7,000 people who have been tested at the city’s State Fairgrounds site have COVID-19. About 45% of those people are Detroit residents. The Motor City is 80% African American.

After reporting last Friday that the city has experienced 6,228 COVID-19 confirmed cases and 326 deaths related to it, Duggan who wears a mask in public, said: “We will see more days like this.”

So you ask how I’m feeling?

It’s been depressing at times and I’ve cried like a baby more than I’d like to admit. On March 28, we lost my father-in-law, Calvin Trent, to a medical condition that was not COVID-19-related. Yet his untimely death is part of the last 21 days for my family.

He was an internationally respected public health professional and advocate. There is a health clinic in the African nation of Zanzibar named after him. A former city of Detroit health director, Trent was revered as a community leader and mentor to many. We also have experienced having a family member who fought for his life on a hospital ventilator for more than two weeks battling the nasty COVID-19 virus. Similarly, we’ve prayed for a good friend who lay in a hospital bed for a couple of weeks in a coma. Her illness is COVID-19-related.

Thankfully, both of them are on the road to recovery.

But it’s tough to track. You can’t keep up with this stuff like it is a baseball scorecard during a Tigers game at Comerica Park. A couple of dozen friends have contracted this wicked virus. Nine of them have died from COVID-19, according to either family members or published reports.

Some were in their 40s, like Marlowe Stoudamire, a talented 43-year-old who quarterbacked the Detroit Historical Society’s awarding-winning Detroit ’67 project, an effort that recognized the historic civil unrest in our city 53 years ago. Marlowe was a force in our community and was destined to do more amazing things.

Similarly, we lost 44-year-old state Rep. Isaac Robinson, who I’ve known for 15 years. The Detroiter’s passion for causes important to him, like fighting poverty, was unmatched. I happened to interview Isaac for Michigan Advance stories twice within the last 30 days of his life.

Another dearly departed friend is Brenda Perryman, a retired high school educator and popular television talk show host. I was honored to have either been a co-host or guest on her metro Detroit cable broadcast no fewer than 25 times over the last seven years.

We still don’t know what to expect from COVID-19. It arrests some who have prior ailments or existing health conditions and others who don’t appear to have any. People can carry the virus without any symptoms, health officials have found. Others struggle with a dry cough, painful body chills and run a triple-digit fever.

The only thing that I know for sure, is: Lots of Black people in my city have been impacted by “The ‘Rona” as some on Grand River and Gratiot Avenue in Detroit have described it. I’m hard-pressed to name anyone who is Black from my city who doesn’t know someone who has it — or died from it.

But on a happier note, my family and friends have continually communicated via Facebook, telephone calls and text messages, and teleconferencing. We’re checking on each other and communicating frequently.

Before COVID-19, I had not played the UNO card game since the 1980s NBC sitcom “The Cosby Show” was the nation’s top television broadcast. My family did that the other day.

I’m staying busy, reporting and writing about how the virus is affecting Detroit, attending several of Duggan’s daily news conferences in Eastern Market about one half-mile from my home. About 60% of the people who I encounter are wearing masks and gloves in public. I began sporting them about 10 days ago.

Duggan said Friday that he drives around the city frequently and most residents are adhering to Gov. Gretchen Whitmer’s stay-at-home executive order and practicing social distancing. City government acquired 100,000 masks last week and police are giving them to residents who aren’t wearing one. Duggan also said city staffers have removed basketball rims from city parks to discourage congregating. I drove by my neighborhood basketball court in Elmwood Park on a 70-degree sunny day last week and it was a ghost town.

For some, all this may not seem like a public health crisis, but for me, it is. For the last 10 days, I’ve wrapped up tight in public. President Donald Trump, on the other hand, declared last week that he is bucking the advice of nationally respected health officials and not wearing a mask in public.

Duggan: Every single Detroiter should have access to COVID-19 test

Apparently, some of my neighbors are on the same page. On Saturday evening, I encountered a group of six people who were both Black and white, with a range of ages, and looked to be having a picnic or sorts on our shared public greenspace. When I asked why they weren’t wearing masks and gloves, one answered: “Because we’re family.” When I took a photo of them, one said to another: “Why don’t you show him your ass.”

That wasn’t funny. This virus is deadly.

Most of the people who aren’t honoring social distancing in my neighborhood tend to be younger and white. State Rep. Tyrone Carter (D-Detroit), who represents my district in the Legislature, talked to me last week about congregating in public spaces amid the COVID-19 crisis. “Young people don’t believe that fat meat is greasy until something happens to them, or somebody in their group,” he notes.

Carter, a middle-aged Black man, contracted coronavirus in early March. He believes that it occurred when attending a retirement celebration for a recently retired public safety officer, but he told me that he’s in “full recovery mode.”

Meanwhile, I haven’t been tested for COVID-19, but I’d like to. Americans have been advised against having a test unless you have experienced symptoms, given the ongoing shortage. But health officials note we can travel with the virus and not have symptoms. There’s so much we don’t know.

Three weeks ago, I had a low-grade fever for five days but experienced no other virus symptoms. Physically, I’ve felt great ever since. Kim, Jackson and I take short walks together most days and we even marched to our neighborhood U.S. postal mailbox on April 1 to submit our 2020 census form. Now more than ever, we need to ensure that our city secures the necessary federal funding that it deserves and that we have federal representation on Capitol Hill and in Lansing.

All things considered, I’m inspired by fellow Detroit residents during the COVID-19 crisis. I’ll share more about their stories in coming days in the Advance, but here’s some of what I’ve witnessed.

Food service employees at Detroit Public Schools Community District have provided free meals and educational booklets to thousands of city residents over the last three weeks. About half of city children live in households that are in poverty, according to federal guidelines.

Paula Green-Smith and Phil Hamilton contracted COVID-19 in mid-March, but the African-American couple living in Detroit’s University District are recovering. They head Urban Health Outreach, which promotes and provides community education, outreach and affordable health care services for uninsured and underinsured citizens of Wayne County. Paula’s and Phil’s message to Detroit residents is to stay home during this crisis.

We have the ability to beat this. On April 12, 1955 — 65 years ago to the day on Easter Sunday — Dr. Thomas Francis Jr., director of the Poliomyelitis Vaccine Evaluation Center at the University of Michigan School of Public Health, announced the Salk polio vaccine was up to 90% effective in preventing paralytic polio. It was “safe, effective, and potent,” Francis said.

I’m hopeful that we will beat COVID-19 sooner rather than later. Perhaps in three months or so, we will be on the road to finding a cure or have learned better how to navigate the disease so it’s not as deadly.

For now, however, I’m keeping on my mask, my gloves and keeping my distance whenever possible.

Ken Coleman: Granny is too important to risk sitting with at the Thanksgiving dinner table

The COVID-19 crisis has rocked Detroit and my life. But it’s also inspired me.