Gov. Gretchen Whitmer said Thursday that the worst of the COVID-19 outbreak in Michigan is probably a month away, and hospitals all across the state still do not have the supplies they need to fight the spread of the novel coronavirus.

“We know that the apex is probably not until the end of April or the beginning of May,” Whitmer said. “That means we’re a month out from when we think we’ll hit the height of this.”

Michigan posted more than 10,000 cases and 400 deaths Thursday. According to Whitmer, we are “nowhere near the end of COVID-19 in the state of Michigan.”

“We know that we are in for a tough three, four, five, six weeks here in front of us,” she said. “We are far from out of the emergency that we find ourselves in.”

Michigan has now had 417 people die of COVID-19. There were 337 deaths as of Wednesday, so there were 80 new deaths reported Thursday.

There are now 10,791 positive cases of COVID-19, the disease caused by a new coronavirus, as of 3 p.m. Thursday, although state officials believe the actual number of cases is much higher. There were 9,334 cases Wednesday. A total of 1,457 new cases were reported Thursday — a slightly slower pace than the 1,719 new cases that posted Wednesday.

Sixty-eight of Michigan’s 83 counties have cases and 26 have reported deaths. Southeast Michigan continues to have the majority of cases and deaths.

The first two cases of COVID-19 were reported in the state on March 10. Whitmer declared a state of emergency that day.

Whitmer said that on Tuesday the state received 400 ventilators from the strategic national stockpile and President Donald Trump told Whitmer the state will be receiving more. Additionally, Detroit will be one of the first cities in the country to receive five testing machines and 5,000 testing kits.

While the state is starting to obtain more personal protection equipment and medical devices, we still are not prepared to handle the rise of cases.

Chief Medical Executive Dr. Joneigh Khaldun said many hospitals on the frontlines are at capacity right now, some hospitals are running low on critical medication and intensive care units are running out of masks and gowns, and, in some cases, reusing them between patients.

Khaldun said that without a vaccine or a cure, the best way to get ahead of the virus is by social distancing.

On Wednesday, Flint Mayor Sheldon Neeley issued a mandatory curfew that is in effect from 9 p.m. to 6 a.m. for the next 30 days to try to curb the spread of COVID-19 and get people to stay at home.

Whitmer said she has not discussed a statewide curfew yet, but says she anticipates a conversation about it “at some point.”

Whitmer declared a state of disaster in Michigan on Wednesday and asked the Legislature to OK a 70-day extension on the state of emergency.

House GOP spokesperson Gideon D’Assandro said the House will extend the state of emergency once it gets back on April 7, however Senate Majority Leader Mike Shirkey (R-Clarklake) said the governor’s request is “too long.”

“The circumstances surrounding the outbreak of this virus in Michigan change rapidly and often.  The conditions we are experiencing today will likely be different than those we encounter next week, next month, or in 70 days,” Shirkey said.

That echoed what Michigan Chamber of Commerce President and CEO Rich Studley said on Twitter Wednesday, complaining, “The current emergency order is broad & restrictive, any expansion is unwarranted and a 70 day extension would be far too longDouble exclamation mark!!”

The COVID-19 public health emergency is serious, but temporary. The current emergency order is broad & restrictive, any expansion is unwarranted and a 70 day extension would be far too long‼️ https://t.co/c6R76yyS0N

The House and Senate have not been in session since March 17. However, Whitmer believes next week is too early for the Legislature to return.

“The Legislature’s insistence on coming in next week is something I implored them not to do,” Whitmer said. “We’ve already lost a member of the Legislature to suspected COVID-19. A person of the 110 member House has lost their lives already. I think that is very inadvisable for them to congregate and to start meeting.”

When legislators do return, however, Whitmer said she hopes they approve her 70-day extension.

“It doesn’t mean it’s embracing a 70-day extension for every other order that I’ve issued,” Whitmer said. “It simply means that we acknowledge that we are going to be in this emergency and we’re going to need to have unique powers during this time to combat COVID-19 and to save lives.”

Whitmer said extensions on state of emergency declarations have been granted in the past for “much less serious times,” including a Macomb County sinkhole and the Flint water crisis. 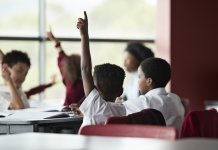 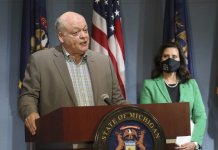 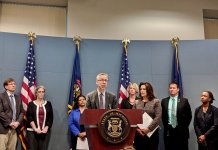