Both campaigns scheduled over a dozen events throughout the state in the four days preceding Election Day. While Sanders participated in eight events by himself over four days, Biden relied on surrogates, like Gov. Gretchen Whitmer, Lt. Gov. Garlin Gilchrist, U.S. Sen. Amy Klobuchar (D-Minn.) and former Secretary of State John Kerry, to campaign on his behalf until Monday, when Biden himself traveled to Michigan.

A win in Michigan for Sanders or Biden could send the message that they are the best candidate to take on President Donald Trump in key swing states like Michigan, Pennsylvania and Wisconsin.

Here’s a slideshow of some of their many campaign stops, from Detroit to Flint to Grand Rapids: 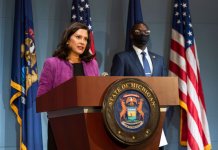