“I am proud to endorse* Joe Biden for president, because the vice president has been a friend to entire state of Michigan, especially the city of Detroit,” Gilchrist said on CNN.

Gilchrist said he believes the “momentum is building” for Biden, noting his strength with Black voters.

Like Whitmer had in a February interview, Gilchrist had told the Advance last week that he didn’t plan to endorse before Michigan’s presidential primary on Tuesday — although he did say, “I would never say never.”

But the race has changed significantly since then, with a number of candidates dropping out after Biden’s rout in the South Carolina primary. And on Thursday, U.S. Sen. Elizabeth Warren (D-Mass.) also left the race, leaving only Biden, U.S. Sen. Bernie Sanders (I-Vt.) and U.S. Rep. Tulsi Gabbard (D-Hawaii) standing.

The endorsement of Gilchrist, Michigan’s first African-American lieutenant governor, is significant, as the former President Barack Obama organizer voted for Sanders in the 2016 primary.

When asked why he voted for Sanders four years ago, Gilchrist said, “I thought it was well-organized and the community organizer in me appreciated the way that it engaged, and so that’s why I chose to support him in the primary,” the lieutenant governor said. “And then was enthusiastic about my support for Secretary Clinton in the general [election].”

As for the 2020 primary, Gilchrist said last week he expected candidates to “engage more deeply” with Midwest voters.

“I have had the pleasure of speaking with almost all the candidates, invited them to know some of my thoughts about what they need to do in Michigan and across the Midwest and across the country. And so, I expect them to engage more deeply. I know that we are a post-Super Tuesday state and that has meant that most candidates spend more time in other places. Hopefully, we can do something about that primary date going into 2024,” he said.

In an interview with the Advance on Thursday, Whitmer said that she’s “been watching this presidential race for the better part of the last year and a few months. I’m always focused on the dinner-table issues,” she said. “And I think that showing up and showing that you can get things done … When the chips were down with the auto industry, it was [President] Barack Obama and Joe Biden that had our back.” 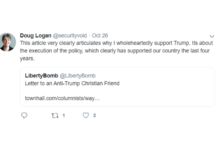