It’s a house divided at the top of Michigan’s government, with Gov. Gretchen Whitmer as a proud Michigan State Spartan and Lt. Gov. Garlin Gilchrist as a loyal University of Michigan Wolverine.

But in the hotly contested 2020 primary, neutrality is the watchword for the Michigan Democratic ticket that swept into office in 2018. Michigan’s contest is March 10 and early voting is underway.

So far, Whitmer, Gilchrist, Attorney General Dana Nessel and Secretary of State Jocelyn Benson have not endorsed any of the current eight Democrats running for president — and Benson has said she will definitely stay out as the state’s top election official.

That’s in contrast to how many of the Republicans who previously had their jobs operated — with the notable exception of former Secretary of State Ruth Johnson. But more on them later.

In an exclusive interview earlier this month with the Michigan Advance after the National Governors Association conference, Whitmer said her odds of backing someone before the state’s primary are “probably low.”

“A lot is going to happen in that three-week span in March. So I think we’re all kind of of the same mindset that [we’re] unlikely to endorse in a primary,” she said, referring to swing-state governors like Jared Polis of Colorado, “and highly likely to jump in once we get past it so that we can work hard to make sure that our party is unified.”

Whitmer’s predecessor, Republican Gov. Rick Snyder, in 2012 endorsed Michigan native Mitt Romney, like much of the GOP establishment. However, Snyder sat out the 2016 primary and general election, although he did criticize now-President Donald Trump for his lack of civility.

In an interview this week in his ceremonial Capitol office, Gilchrist cracked the door slightly to a pre-Michigan primary endorsement.

“I would never say never,” he said. “I have had the pleasure of speaking with almost all the candidates, invited them to know some of my thoughts about what they need to do in Michigan and across the Midwest and across the country. And so, I expect them to engage more deeply. I know that we are a post-Super Tuesday state and that has meant that most candidates spend more time in other places. Hopefully, we can do something about that primary date going into 2024.”

Gilchrist, who worked on President Barack Obama’s 2008 and 2012 campaigns, said that he voted for Sanders four years ago because he was “excited about his campaign.

“I thought it was well-organized and the community organizer in me appreciated the way that it engaged, and so that’s why I chose to support him in the primary,” the lieutenant governor said. “And then was enthusiastic about my support for Secretary Clinton in the general [election].”

Republican Brian Calley, who held the LG position before Gilchrist and is now president of the Small Business Association of Michigan (SBAM), had a somewhat tortured history of endorsements. He also supported Romney in 2012.

But Calley got crossways with many GOP activists in 2016. He first backed Ohio Gov. John Kasich, who was widely considered the most moderate choice in the primary. Calley endorsed Trump in May in a late-night tweet, but withdrew it after the “Access Hollywood” tape surfaced that fall of Trump bragging about sexually assaulting women and said he should drop out.

However, Calley did tell this reporter in a 2017 interview for Inside Michigan Politics that he ended up voting for Trump on a straight-party ticket. That wasn’t enough to convince Republicans in the 2018 GOP gubernatorial primary, in which then-Attorney General Bill Schuette snagged Trump’s endorsement. Calley told the Advance in December 2018 that it “absolutely was decisive” in Schuette’s victory.

Calley: ‘Zero question’ he would have been stronger than Schuette against Whitmer

Nessel, who won the Democratic nomination due to an influx of new progressive activists at the 2018 spring convention, again told the Advance this week that she’s not planning to back a presidential contender in the primary.

“I will campaign as hard as I can” for the Democratic nominee, she said. In a December roundtable with reporters, Nessel said that was “in part, because I see how devastating the policies of the Trump administration have been to our state, to our nation.”

This week, she praised both Buttigieg and Warren for calling for Enbridge’s Line 5 oil pipeline to shut down, something Sanders has supported for months. But Nessel, who is fighting the company in court, stressed to the Advance that her praise for candidates on the issue is just that — and not an endorsement.

However, Nessel still got social media blowback from some Sanders supporters over her tweet on Buttigieg’s Line 5 comments, which she addressed on Twitter Tuesday.

“Yesterday, I praised a [presidential] candidate who called for the shutdown of Line 5, an issue I ran on, am passionate about, and which my office is in litigation on. In response I was repeatedly called a ‘corporate shill’ which seems ironic since I am suing an oil & gas company,” Nessel wrote. “Throughout this campaign, I routinely compliment [different] candidates for taking strong positions on issues I agree with. Pledging to oppose an officeholder who has the audacity to commend a candidate you may not support is counterproductive. Bad for our nation, bad for the Democrats.”

Nessel succeeded Schuette, who took the exact opposite approach to presidential primaries: He was all in. Schuette chaired Romney’s 2012 bid, led Republican former Florida Gov. Jeb Bush’s campaign in 2016 and later campaigned alongside Trump.

Meanwhile, Benson has pledged to stay neutral in the 2020 presidential race because of her role administering elections as secretary of state.

“Coming into this job, I knew it was important for me to lead in a nonpartisan way, to not endorse in any races that I’ll be overseeing as the state chief election official,” Benson told the Advance. “Now that I am a secretary of state, it’s all the more apparent to me how critical that is. I’ve been careful not to weigh in on social issues, as well, that may come before my office in the form of ballot initiatives.”

Benson is following in the footsteps of Johnson, who also didn’t endorse presidential candidates. That began with a 2010 campaign pledge Johnson and Benson both made when they were running against one another, noted Garrett Wheat, chief of staff for Johnson, who’s now a GOP state senator. And now Benson has adhered to that promise, as well. 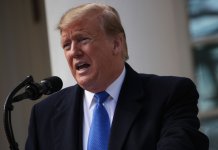