Many city and township clerks around the state are struggling to process absentee voter ballots in the first major election under Michigan’s new voting law passed in 2018.

Requests for ballots for the March 10 presidential primary are skyrocketing and clerks say they are not prepared to handle the influx. But legislation to ease the problem won’t be taken up before the election, Senate Majority Leader Mike Shirkey (R-Clarklake) said Wednesday.

While most of the national focus has been on early voting states — Iowa, New Hampshire, Nevada and South Carolina — Michiganders are already voting, too. Thanks to Proposal 3, absentee ballots have had to be available since Jan. 25.

The Secretary of State’s office reported absentee ballot applications have increased more than 60% compared to 2016. As of Tuesday, 705,326 ballots have been issued.

“The state is offering support and guidance to clerks across the state, as well as matching funds for jurisdictions that choose to purchase additional tabulator machines,” Secretary of State spokesman Jake Rollow said in a statement.

Kim Markee, the clerk for Waterford Township, said every effort is being made to fulfill the spike in ballot requests to her office, but additional workers, funding and time are required.

In preparation for the election, Markee said her township, which has 56,290 registered voters, according to the Secretary of State, had to buy a second high-speed ballot scanner, costing $90,000. However, she said this won’t be enough to handle the influx of absentee ballots under Proposal 3.

Michigan voters approved the constitutional amendment in the November 2018 election, which included several policies intended to make it easier for Michiganders to vote. That includes the ability for citizens to register to vote the day of an election and request absentee ballots ahead of time for no reason.

“When these proposals come up, more consideration needs to be given as to what the real impact will be down the road,” Markee said. “I don’t think all of this was considered with the additional expenses for high speed scanners, for employees to be able to satisfy the proposal and meet the new law requirements.”

Markee, along with other clerks, testified to the state Senate Elections committee on Jan. 29, making the case that they need more time to process ballots. Absentee ballots in Waterford Township have jumped from 4,400 in 2016 to 15,700 absentee ballots this year.

Currently, clerks cannot begin processing these absentee ballots until 7 a.m. on the day of an election.

The clerks at the committee offered their support for legislation that would help ease stress on election day workers. Senate Bill 757, sponsored by former Secretary of State Ruth Johnson (R-Holly), would allow clerks in communities with a population of 40,000 residents or more to remove absentee ballots from the envelopes they were mailed in by before election. The security sleeve on each ballot would remain until election day.

Aileen Dixon, clerk for the city of Troy, testified that the city plans to process 25,000 absentee ballots for the presidential election. She said it’s a feat that will cause Election Day workers, many of which are retired seniors, to work an unrealistic 24 hour shifts to process the ballots on time.

“These are experienced workers who are obviously passionate about their work,” Dixon said. “They want to do their best and make sure every ballot is counted with 100% accuracy. The best way to ensure our absentee ballot is accurate and secure is to provide our workers and election officials with the time we need to do our work.”

Wayne State to observe Election Day as a holiday

Senate Bill 757 cleared the committee last week and was sent to the Senate floor, but Shirkey said he doesn’t plan to put it to a vote prior to the primary, which is highly competitive on the Democratic side, but not really for Republicans, as President Trump is an incumbent.

“I don’t necessarily think we should be trying to solve a problem before it actually occurs, No. 1,” Shirkey said, according to the Associated Press. “And No. 2, what’s being proposed in terms of them setting them up by partially opening, I believe that’s the nose of the camel underneath the tent toward early voting, early counting, which I’m very opposed to. … If I had to choose between early voting, early counting versus late reporting, I’ll take late reporting all day long.”

A Shirkey spokeswoman didn’t respond to a further request for comment.

Michigan is not alone in concerns over election processes. The Iowa caucuses were on Feb. 3 but former South Bend, Ind., Mayor Pete Buttigieg wasn’t declared the winner until Feb. 9.

That’s sparked widespread criticism about the Democratic presidential nominating process, including from Michigan officials like Attorney General Dana Nessel, who made the case on Twitter that the Mitten State should go first.

“Dear Michigan Legislators: I don’t want to be the Iowa of the November election. We need more time.” 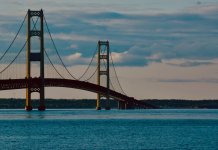