Upton said he has fond memories of canoeing in the northeastern Minnesota area near Lake Superior as a teenager.

But McCollum lacks broad support from the rest of her state’s congressional delegation. Only two other Minnesota lawmakers have publicly backed her bill — her latest and boldest attempt to try to upend a controversial copper-nickel mine that has gained new momentum under Trump.

The debate over the mine highlights a political struggle in the state. Republicans are vying for support on the Iron Range that was once a Democratic stronghold. And some members of the state’s Democratic-Farmer-Labor party are trying to walk a political tightrope to balance environmental protections against a call for more jobs in rural areas.

“There is a fight between the urban Democrats and the rural Democrats, and it is in part over environmental issues,” said David Schultz, a political science professor at Hamline University. “And what it tells us about Democratic politics is really about transition; it’s a transition from the old Democratic Party coalition … to a new coalition, rooted more in urban and suburban areas. It’s a pretty significant shift.”

Democrats and Republicans have waged a political tug-of-war for the past five years over whether mining should be allowed in the area.

The driving force in the debate: a proposed new mine from Twin Metals Minnesota, a subsidiary of Chilean mining giant Antofagasta. It would process 20,000 tons of ore per day from an underground mine on the doorstep of the Boundary Waters Canoe Area Wilderness.

In 2016, the President Obama administration made two significant moves to halt mining in the area: It refused to renew the mineral leases and began to study the effects of mining to pursue a 20-year mining ban.

But the Trump administration reversed both of those efforts, renewing the mineral leases and abruptly halting work on the study. The administration shut down attempts from McCollum and other legislators to force completion and release of the study.

McCollum’s bill attempts to end the fight: it would ban mining for copper, nickel and precious metals across 200,000 acres of the Superior National Forest in northeastern Minnesota.

McCollum says the risk is too high for the area’s pristine waters — where Minnesotans and others canoe and camp and fish in American’s most-visited national wilderness.

“Water is part of the essence of life and protecting water for not only recreation is important, but I am also fighting to protect water because of its value for generations to come.”

McCollum, who represents St. Paul and some surrounding areas, has become the biggest force in Congress attempting to put the brakes on the mine.

She’s a senior member on the U.S. House Appropriations Committee, a position she used to try to require federal studies of mining in the area as part of the 2020 spending bills.

“There is no doubt that Rep. McCollum is the most vocal and active defender of the Boundary Waters, and her leadership on this bill is one more demonstration of that commitment,” said Daniel Hartinger with the Wilderness Society in Washington, D.C.

She has support from a few key lawmakers. U.S. Rep. Raul Grijalva (D-Ariz.), the chairman of the House Natural Resources Committee, signed on as an original cosponsor of her bill and is planning a hearing in his committee in February.

And the bill has backing from several Republicans. McCollum says other colleagues in the House and Senate have expressed interest in supporting her cause.

But so far, the Minnesota delegation is somewhat divided on the issue — showcasing the struggle the legislation would have to make it into law.

Only two other Minnesota lawmakers signed on as original co-sponsors for McCollum’s bill — Democratic U.S. Reps. Ilhan Omar and Dean Phillips — both of whom represent districts near the Twin Cities. U.S. Rep. Angie Craig, a freshman Democrat, said she is still considering the issue.

“I continue to have serious reservations about mining in the Boundary Waters and am currently reviewing the newly introduced legislation” Craig said in an email this week.

Democratic U.S. Rep. Collin Peterson, whose rural district backed Trump in the 2016 election, has been supportive of mining. He cosponsored a bill in 2017 that sought to reverse the Obama administration moratorium on mining near the Boundary Waters.

‘I will be left with the mess’

Neither of Minnesota’s Democratic U.S. senators have introduced companion legislation. Aides for U.S. Sens. Amy Klobuchar, who’s running for president, and Tina Smith said they are still considering next steps.

Klobuchar and Smith both supported the effort to force the Trump administration to finish a study of how mining for copper, nickel and other precious metals could affect the watershed. McCollum had included that language in the spending bill for the Interior Department for 2020, but White House negotiators insisted on its removal in final negotiations.

But Klobuchar has been walking a tightrope on the issue — one that demonstrates a balancing act for Democrats who want to keep rural Midwestern votes.

“She has tried to play it both ways, to support the environment and also try to figure out how to appease those rural Democrats. She is trying to straddle this in a tough way,” said Schultz.

When the Obama administration bypassed the permit review process to issue the mining ban — just before leaving office — Klobuchar protested in a 2016 email to then-Agriculture Secretary Tom Vilsack. Klobuchar wrote in the leaked email, obtained by E&E News, that she was “not for or against this project,” but wanted a “fair process” without interference from the White House or activists.

“Trump will reverse this,” Klobuchar wrote — a prediction that came true. “When you guys leave and are out talking about a job message for rural America, I will be left with the mess and dealing with the actual jobs.”

Klobuchar is distinct from other Democratic presidential candidates in her hesitance to weigh in on whether the mine should go forward. Businessman Tom Steyer, U.S. Sen. Elizabeth Warren (D-Mass.), U.S. Sen. Bernie Sanders (I-Vt.) and former South Bend, Ind., Mayor Pete Buttigieg have each pledged to stop the mine. The Boundary Waters Action Fund, the political arm of the Minnesota-based Campaign to Save the Boundary Waters, has targeted national politicians with their advocacy. The group even has activists in Iowa calling for a ban on mining near the Boundary Waters.

On the campaign trail, Klobuchar describes herself as the granddaughter of an iron ore miner and touts her ability to win back working-class voters. In her Senate races, Klobuchar has won by wide margins across northern Minnesota, but the area has flipped against Democrats in recent elections.

Minnesota’s 8th District, which includes the the Boundary Waters, was long a Democratic stronghold. That changed in 2010 when Republican Chip Cravaack defeated the Democratic incumbent as part of the Tea Party wave. He lost in his next election to Democrat Rick Nolan, but Nolan retired in 2018.

When the seat opened up again, Trump campaigned for Republican Pete Stauber and vowed to remove the Obama-era mine ban. Trump has applauded the mine in return trips to the state. Stauber said this month he was “outraged” by the proposal from McCollum. He and U.S. Rep. Tom Emmer (R-Minn.) support the mining project for the jobs it could bring to the area.

‘We are not making any more wild places’

Many who advocate for the Boundary Waters have a connection to the place — memories of family vacations or wilderness expedition. Environmental and recreation groups are lining up behind McCollum’s proposal.

Land Tawney, the president of Backcountry Hunters and Anglers, said his group is supporting  the legislation to try to elevate and nationalize the issue.

“We are not making any more wild places in this country, and this is one of the wildest, but it is also one of the most accessible,” Tawney said of the Boundary Waters. His Montana-based group represents 40,000 members.

McCollum says her motivation is not sentimental, but a firm belief that the Boundary Waters need to be protected as a unique natural resource, like the Grand Canyon — and as such worthy of advocacy from those inside the state and around the country.

“People don’t have to put a canoe in the Boundary Waters to appreciate that there are still some places in this world where you can put a cup into a body of water and drink from it safely. How many places can you do that in the world?” McCollum said. “Just knowing those places exist, I feel compelled to help protect them for future generations, whether or not they experience it for themselves or not.”

‘It is incredibly urgent’

The area around Ely, Minn., near the boundary waters, was once home to 11 operating mines. There have long been mining leases available in the Superior Forest, the national forest adjacent to the Boundary Waters Canoe Area. But those leases mostly sat dormant, until more sophisticated technology made the area attractive to mining companies in recent years.

Twin Metals submitted formal plans last month to state and federal regulators. The company plans to use state-of-the-art technology that it claims will avoid the acid-generating tailings usually associated with metal mines.

“The bill that was introduced is an attempt to bypass the rigorous regulatory and environmental processes already in place to review and permit mining and industrial projects on public lands,” said Kathy Graul, public relations manager for Twin Metals.

Twin Metals estimates that once their mine is operational, it could bring over 700 new full-time jobs and up to 1,400 spinoff jobs to the region.

Meanwhile, the Trump administration has also proposed changes to federal regulations to try to speed up the permitting process for mines and other projects nationwide. That process has added to the urgency for conservation groups who want to stop the mine.

“This legislation is the very necessary remedy to the unlawful actions of the Trump administration, trying to fast-track risky mining that would turn the headwaters of the Boundary Waters into an industrial mining facility,” said Jeremy Drucker of Campaign to Save the Boundary Waters, the group that formed in 2013 to try to stop the mine.

The group has also sued to try to block the project.

“It is incredibly urgent. The farther it goes down the line, the harder it becomes to stop,” said Hartinger of the Wilderness Society. “The reason it is so urgent … is because the damage of acid mine drainage would be irreversible, it is not something that can be undone once the irreparable happens.”

Advocates hope the bill could be passed as part of a large public lands package, like one that became law last year. But other similar bills have been stymied by the Senate and the Trump administration. The White House issued a veto threat to legislation the House passed last fall that would prohibit mining near the Grand Canyon. The Senate did not take action on the bill.

But McCollum says she is pressing on.

“Congress’s voice needs to be heard, and we need to have a full, transparent discussion as to why mining is incompatible in the Superior Forest adjacent to the boundary waters,” she said. 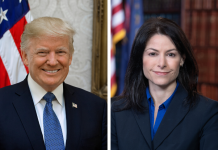 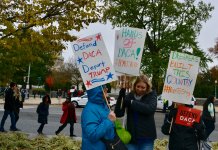