Among her notable initiatives, Whitmer proposes to wipe out school lunch debt for Michigan students, offer 12 weeks of paid parental leave for state employees and $40 million for local governments to plan and deal with climate change impacts, like shoreline erosion.

“I’m focused on getting things done that are going to make a difference in families’ lives right now,” she told reporters. “This year’s budget is focused on three major themes that will help us accomplish that.”

This year’s budget process is a chance for the Democratic governor and the GOP-controlled Legislature to press the reset button after a rocky first year, with the FY 2020 budget dominating the better part of nine months.

Last March, Whitmer recommended $60.2 billion in spending for FY 2020. After wrangling for the better part of last year with Republicans — who rejected her 45-cent gas tax increase for roads that was part of her budget — the FY 2020 budget stands at $59.4 billion. Whitmer’s budget proposal represents a 4% increase, a little more than the 2.3% rate of inflation.

Whitmer took a government shutdown off the table by signing budget bills on Sept. 30 — the last day before FY 2020 began. But she also vetoed almost $1 million in spending and shifted $625 million within departments to better align with her priorities, irking Republicans.

The three leaders agreed to an almost $600 million budget supplemental in December, as well as some limits to her administrative powers and a July 1 budget deadline in the future.

Whitmer already popped her short-term roads plan, having announced a $3.5 billion bonding plan for major highways in her State of the State address last week. That doesn’t need legislative approval — which has angered many Republicans — and the State Transportation Commission OK’d the plan on Jan. 30.

The governor has said the ball is in the GOP’s court to come up with a comprehensive long-term plan that will improve local roads and bridges.

“I look forward to talking with Gov. Whitmer about the priorities her team laid out this morning,” he said. “There are some areas where we will have to improve upon her agenda, where she continued to pick winners and losers with schoolchildren and rural Michigan families. But there are also many areas where we all agree and can work together to get things done for the people we serve, including fixing our crumbling roads and the help for shoreline erosion we requested.”

“All of this can and should be done without asking Michigan taxpayers to pay more money,” he said. “As always, my focus is on using existing resources as efficiently and effectively as possible to make all of Michigan an even better place to live. I am hopeful the governor will come to the table in the months ahead with that same goal in mind.”

Gilda Jacobs, president and CEO of the nonpartisan Michigan League for Public Policy, praised many of Whitmer’s health care, safety net and education proposals, but said that Michigan’s outdated tax system is holding back progress.

“What we have here is a failure to rejuvenate. As the governor’s proposal outlined today, the state’s budget revenues are facing significant constraints, due in part to the decisions of her predecessor,” Jacobs said. “Gov. Rick Snyder’s 2011 business tax cuts decimated state revenue then and now, and led to nearly a decade of disinvestment and degrading infrastructure, roads and water systems. All roads lead back to revenue, and the greatest challenge and most outdated infrastructure in our state is actually our tax system. We don’t need more money this year, we need more period, whether it’s reining in business tax cuts, simply keeping up with inflation, or taking bold action to bring in new funds.”

Some of the highlights of Whitmer’s proposal are:

Advance reporter Laina G. Stebbins contributed to this story. The Advance will have further budget coverage throughout the day. 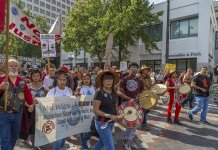