An indigenous community has uprooted a Canadian energy company’s plan to build a permanent nuclear waste repository by the shore of Lake Huron, after years of vocal opposition to the proposal by Canadian and American lawmakers and residents.

The company, Ontario Power Generation (OPG), began considering the spot in Ontario across from Michigan’s “Thumb” years ago. OPG said in 2013 that they would not build on the site unless the indigenous community in the area gave its approval.

Late Friday, the more than 4,500-member Saugeen Ojibway Nation rejected the bid, with 85% of the votes cast in opposition to the plan.

In response, OPG sent out a press release confirming that it will no longer consider the Bruce site and will commit to finding an alternative.

In a Facebook post on Saturday, U.S. Rep. Dan Kildee (D-Flint) heralded the vote as a “huge victory” for the Great Lakes.

“Canada’s proposal to permanently store millions of tons of nuclear waste in Kincardine, Ontario, less than a mile from Lake Huron, never made sense,” Kildee said. “Nuclear waste remains radioactive for thousands of years, and burying it next to the Great Lakes would have threatened our economy and clean drinking water for over 40 million people.”

“Stopping construction on this irresponsible project has been a priority of mine since I first came to Congress,” Mitchell said. “… I thank the Saugeen Ojibway Nation for their vote opposing this misguided effort and their commitment to protecting the Great Lakes.”

The Lake Huron site had been one of the company’s top two choices, after narrowing it down from 22 options.

Just last week, state Rep. Gary Howell (R-North Branch) passed a concurrent resolution out of a House committee that urged Congress to prevent Canada from storing nuclear waste on Lake Huron. The resolution was backed by a dozen environmental groups. 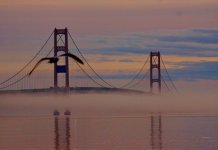 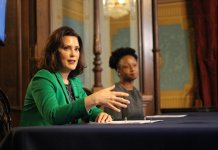