State Sen. Mallory McMorrow (D-Royal Oak) was all too aware that filing a sexual harassment complaint against fellow state Sen. Peter Lucido (R-Shelby Twp.) could kill her shot at re-election. Still, she felt called to do it anyway.

“… This very well may be the end of my career,” McMorrow told reporters after Tuesday’s Senate session. “But honestly, if that’s the case, I’ll go back to what I was doing before. … I’ve got a career I can fall back on, and I’m very lucky in that regard.”

McMorrow filed a formal sexual harassment complaint about Lucido with the Senate Business Office Tuesday morning describing a “degrading” and “callous” interaction with Lucido during New Senator Orientation on Nov. 8, 2018. The encounter allegedly occurred during a break after the sexual harassment portion of the training, in which Lucido made remarks that made McMorrow uncomfortable and put his hand “very low on [her] back” throughout their interaction.

Lucido did not return a request for comment from the Advance on Tuesday. He denied McMorrow’s accusation to Crain’s Detroit: “I categorically deny this allegation, which I believe is completely untrue and politically motivated.”

McMorrow said she will not be releasing the physical document itself because, since complaints are kept confidential by the Senate Business Office, she would be wary of potentially dissuading others from filing reports.

Her main motivations for coming forward about the incident now, McMorrow said, were the feelings of “guilt and responsibility” she experienced while reading Michigan Advance reporter Allison Donahue’s story last week about comments Lucido made to her while she was trying to interview him. Among the remarks Lucido made to Donahue included musing that a group of schoolboys he was with could “have a lot of fun with you.”

Donahue’s story “hit me like a ton of bricks,” McMorrow said.

“I decided to come forward this week after reading Allison’s report, and specifically hearing the way that she described it. She gave an interview where she said it made her feel small. She immediately snapped back to being 15 years old – and that’s exactly how I felt.

“In that moment, I mean, I felt a bit of responsibility for not having said something sooner,” McMorrow said.

In what she hopes will come of the report, McMorrow said she ultimately hopes that by coming forward publicly, more people will be encouraged to share their own story.

“I know I’m a sitting member; I know that my story carries weight,” McMorrow said. “… It’s on us to change this culture and make this a comfortable place for everybody to work.”

She also seemed to reference Lansing-based MIRS News’ decision not to rescind its “2019 Legislator of the Year” award for Lucido, for which she has publicly criticized the publication. MIRS last week released a statement declining not to retroactively consider factors like a legislator’s personal behavior, and primarily focusing on their “effectiveness” as a lawmaker.

“My hope is that we set a precedent here that we consider the totality of what these jobs mean,” McMorrow said. “Being an elected official isn’t just how many bills you can put your name on or how many pass, it’s how you treat people. I represent 280,000 people and everybody in this room represents all 10 million people in the state of Michigan. So my hope is that the way we gauge how effective people are changes.”

McMorrow also told reporters that, although her Democratic colleagues in the state Senate have been “overwhelmingly supportive,” she has not yet heard from any Republicans and Lucido has not reached out to her personally. Lucido also has not apologized personally to Donahue.

Immediately after McMorrow talked to reporters, Senate GOP spokeswoman Amber McCann told them that both Donahue’s and McMorrow’s reports will be investigated on their own merits, although “the fact that they are both against the same person I’m sure will be taken into consideration, as well.”

McCann added that the Senate Business Office is in the process of retaining additional legal council to aid with the investigation, which she said is “not unusual.”

“The Senate majority leader [Mike Shirkey (R-Clarklake)] will consider options [for disciplinary action] once we know the findings of the investigations,” McCann said.

In 2018, the Associated Press reported the Legislature had spent $269,000 on harassment complaints from 2000 to 2007. AP Lansing reporter Dave Eggert reports that AP has found there have been about 100 state lawmakers across the country who have been publicly accused of sexual misconduct or harassment since January 2017, including 38 who have resigned or been expelled from office. 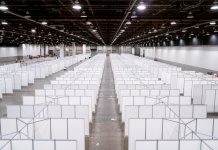 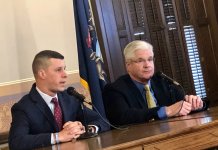