It’s a safe bet that if a Republican lawmaker told a female reporter that a group of schoolboys could “have a lot of fun with you” before 2016, a significant number of his GOP colleagues would have felt pressure to denounce him and call for his resignation.

But there’s been only a few statements from Michigan Republicans against one of their own, state Sen. Peter Lucido (R-Shelby Twp.), for his degrading sexist comments to Michigan Advance reporter Allison Donahue last week at the Capitol. She bravely reported them in a first-person story, something we, of course, would have published no matter who it was about, be it a Republican, Democrat or independent.

It’s hard not to point to a sea change in 2016, when Republican Donald Trump was elected president after the release of the “Access Hollywood” tape showing him bragging about sexually assaulting women (“grab ‘em by the pussy.”)

Now more and more Republicans are comfortable expressing sexism (yes, there’s a study on this).

There’s been no shortage of elected Democrats blasting Lucido, with state Rep. Laurie Pohutsky (D-Livonia) declaring his comments “are a prime example of the sexism and harassment my female colleagues and I face on a daily basis.” State Sen. Rosemary Bayer (D-Beverly Hills) said his remarks were “absolutely appalling. I don’t even have words to describe how angry I am.”

And at an event in Saginaw this week, Whitmer called Donahue “incredibly brave” for coming forward and said there’s a responsibility for others to call out sexist behavior.

State Senate Majority Leader Mike Shirkey (R-Clarklake) did say Lucido’s remarks were “very unacceptable” and House Speaker Lee Chatfield (R-Levering) called them “completely inappropriate.” However, both made sure to say that was “if” Lucido actually said the comments, despite the reporter’s audio recording and detailed account.

Shirkey promptly called for a Senate Business Office sexual harassment investigation. But this is not an independent, nonpartisan outside probe and so far, it’s only limited to Lucido’s comments to Donahue, not a broader pattern of behavior from a member of Senate GOP leadership who chairs powerful committees.

Some of that behavior has been out in the open. During last year’s budget fight, Lucido in an interview scoffed at Whitmer as “play[ing] with Barbies.”

He also was a member of a violent anti-Whitmer Facebook group that has since been taken down, which, in fact, was what Donahue was trying to interview Lucido about when he decided to publicly belittle her with his sexist outburst.

So far, Shirkey has refused to talk about possible consequences, like booting Lucido from leadership, the caucus or the Senate. And sadly, no one believes any of that will happen.

The majority leader’s own history can’t be ignored, either. In November, he called Whitmer and Democrats “batshit crazy.” Shirkey has gotten blowback for condescendingly calling her “my governor,” something he didn’t seem to do with her predecessor, Gov. Rick Snyder. He’s also recently compared abortion to slavery.

Shirkey’s advice about Whitmer’s equal pay executive directive was to “ignore it” and he refererred to her business tax increase proposal as “doubling down on stupid.”

There definitely seems to be a culture problem in the Republican Party. And Lucido is following the Trump playbook, first by making vile and demeaning comments to a woman, then repeatedly changing his story — and criticizing her in interviews in a clumsy attempt to gaslight us.

He even refused to give Donahue the respect of a personal apology.

That’s why you’re not seeing a flood of GOP officials, consultants and activists condemning Lucido. Sexist comments are acceptable in the party in the Trump era. Slamming the media is encouraged. There are no more required feints to civility, editorial boards be damned.

Republicans have made the calculation that there’s a bigger price to be paid from their party’s base in coming out against Lucido than doing the right thing.

How do I know? That’s exactly what some have sheepishly told me in private.

Now in the midst of the firestorm, as dozens of state, national and international media have reached out to me for comment as Michigan Advance editor, it is certainly possible that I missed some other prominent Republicans criticizing Lucido, and I invite you to draw my attention to them. But there’s no doubt there’s been far more Democrats.

I only wish this would inspire a few more Republicans to come out for basic decency and respect for women. Because — and I cannot believe I have to write this — that should not be a partisan issue. 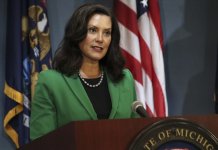 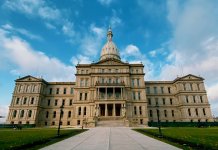