The fate of state Rep. Larry Inman (R-Williamsburg) now rests in the hands of 12 jurors, who began deliberations on the federal corruption case just before 1:30 p.m. Monday.

On the fifth day of the trial at the federal court in Grand Rapids, Inman’s defense rested after calling two of Inman’s former doctors and after Chief Judge Robert Jonker ruled against two more potential witnesses requested by the defense.

Inman is accused of attempted extortion, bribery and lying to the FBI. He took the witness stand on Friday, and again briefly Monday, to declare his innocence and blame his dependence on opioid painkillers for memory lapses.

In his Friday testimony, Inman said the texts he allegedly sent to union lobbyists that spawned the investigation “doesn’t even sound like me. … I had no idea I sent anything like that,”

Defense attorney Chris Cooke accused the government of burying key evidence which he says he never saw before the trial, and he slammed what he viewed as a lack of evidence in the government’s case.

“If my client was an extortionist … wouldn’t there be more than that?” Cooke said in his closing argument. “It’s only two texts.”

The text messages, he said, do not amount to an “overt act,” Cooke told the jury.

Inman’s long-time doctor, Russell Van Houzen, testified that the medication Inman was taking as a result of multiple surgeries — to which the lawmaker says he became addicted — and could lead to confusion and mental deterioration.

But prosecutor Christopher O’Connor told jurors not to buy the argument that Inman has no recollection of sending the text messages, noting that the lawmaker was able to recount myriad other details from June 2018, when the texts were sent from Inman’s phone.

“[Inman] remembers all kinds of details from the relevant time period, except for one,” O’Connor said, noting that the text messages themselves amount to a quid pro quo, or “this for that.”

Earlier in the trial, state House Speaker Lee Chatfield (R-Levering) testified that there were three “C’s” which typically guide lawmakers as they prepare for a vote: constituents, caucus and conscience.

O’Connor said that in Inman’s case, those three C’s” appeared to be “cash and campaign contributions.”

Earlier on Monday, Cooke attempted to bring back Lisa Canada, political and legislative director for the Michigan Regional Council of Carpenters and Millwrights — one of the unions Inman allegedly sought contributions from — but Jonker denied the request.

Cooke wanted Canada to testify again regarding a March 2018 email from Carpenters union lobbyist Noah Smith in which Inman had brought up wanting $30,000 in union campaign contributions.

The email had been disclosed by the government in June, but Cooke said he never saw it.

The judge also blocked an investigator from testifying who had attempted to serve a subpoena to state Rep. Steve Marino (R-Harrison Twp.), who had allegedly been keeping a tally on the vote, as the Advance previously reported.

Cooke said the investigator, who declined to speak with reporters as he was leaving the courthouse, had been unable to track down Marino. 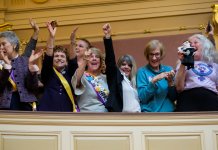