The northern Michigan lawmaker stands accused of trying to sell his vote on the legislation in the pursuit of campaign cash for a possible primary challenge he may have faced for a vote to keep prevailing wage.

On the second day of the federal trial in Grand Rapids, Inman’s defense attorney, Chris Cooke, sought to convince the jury that the text messages asking lobbyists to “max out” and seeking help could be open to interpretation.

“That’s been our point from the beginning and I think the representative has made that clear,” Cooke told reporters Wednesday afternoon outside the federal courthouse in downtown Grand Rapids where the trial is being held.

Help for Inman could come in different forms, he argued, with a lack of “quid pro quo” or “this for that” to serve as a smoking gun.

“People will not go down for $5,000, not that we dont [sic] appreciate it,” read part of Inman’s text ahead of the vote. “Please get with the all the trades by Monday, I would suggest maxing out on all 12, or at least doubling what you have given them on Tuesday, asap, we never had this discussion, Larry.”

But to long-time lobbyists like Lisa Canada with the Michigan Regional Council of Carpenters and Millwrights, Jim Kirsch with Kelley Cawthorne and Noah Smith with Capitol Services, each called to testify by the prosecution about the texts they received, the messages left little room for interpretation.

“I think what this says is, ‘I want $30,000 or you won’t get my vote,”’ Canada told the court of her interpretation of the text she received from Inman just days before the contentious vote. “I thought he was asking for money. That’s why I turned him in.”

Additionally, Canada refuted a claim made Tuesday by Cooke that the union had donated toward a recall effort for Inman in his Grand Traverse County district. Rather, she directed five people working on behalf of the union to travel to Traverse City last month and gather signatures for the recall.

Kirsch, who received a near-identical text message from Inman, told the court: “on its face, [the message is] inappropriate,” because it appeared to be seeking campaign contributions in exchange for voting a certain way.

Both Smith and Kirsch were on retainer by the Carpenters’ union to lobby on behalf of keeping the prevailing wage law. They were instructed by the union and its attorney not to respond to Inman.

Inman, who ultimately voted to repeal the union wage law, was seeking $30,000 from various trade unions, according to the June text messages.

But it appears he may have been seeking that amount of money approximately three months earlier as well, according to a document discussed during Wednesday’s proceedings.

While not admitted as evidence, Smith, the Capitol Services lobbyist, wrote an email to Canada in March 2018, following a meeting with Inman.

Smith testified that Inman had made some mention of needing $30,000 for a likely primary, but it does not appear that request was tied to a specific vote.

Inman returns to House, says ‘my brain is clear’ after opioid treatment

The email was a point of objection for Cooke, Inman’s attorney, who claimed he had never seen the email. The prosecution, however, said it had been disclosed in June, following Inman’s indictment.

Cooke told the Advance after the proceedings that he’s unsure at this point as to the significance of the email.

“We’ll have to dig into that a little bit, and I think I raised that with the court today,” Cooke said. “I’m curious about a lot of things with respect to that email.”

On Thursday, the government plans to call several more witnesses, including state House Speaker Lee Chatfield (R-Levering) and other sitting and former lawmakers.

Cooke declined to say whether Inman would testify in his own defense or whether the defense would be calling any of its own witnesses.

For his part, Inman has cited post-indictment treatment for opioid addiction as a key part of getting through the criminal allegations. He stressed that treatment again in brief remarks to reporters on Wednesday.

“Physically, I’m feeling a lot better,” Inman said. “And, you know, having gone through that experience of addiction and going through [the] treatment center has opened my eyes up to heal the world problem on addiction and treatment and getting your life back.” 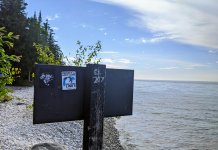