In a Nov. 7 episode of the podcast, “No Filter Sports,” nationally known sports commentator Bob Page described a conversation he said he had with Michigan State University Trustee Joel Ferguson prior to the Nov. 5 MSU men’s basketball game.

In the episode, Page said Ferguson during their Nov. 5 conversation used the term “overblown” to describe some aspects of the Larry Nassar crisis at MSU. Nassar, a former MSU and USA Gymnastics physician, was accused by more than 300 women and girls of sexual assault and is now serving what amounts to a life sentence in prison.

The Advance reached out to Page, a sports commentator who has had career stops at television stations in Lansing, Detroit and New York City. On the Dec. 2 episode of the podcast, he said he stood by his account.

In a Tuesday phone call with the Advance, Ferguson denied ever using the word “overblown.” Ferguson said he and Page largely talked about sports and the conversation was taken out of context.

“I refute it. I refute it, period,” Ferguson said, referring to the “overblown” comment. “We were talking about some sports thing. I have nothing to say, and I don’t feel I said that, anyway.”

In January 2018, Ferguson apologized for a WVFN-AM radio interview — in which he said was more to MSU than “just this Nassar thing” — as now-former President Lou Anna K. Simon faced increased pressure to resign for her handling of the crisis.

In the Nov. 7 episode, Page also said Ferguson told him that former Trustee Nancy Schlichting — who in October resigned from the MSU board — left for a different reason than the one she listed in her resignation letter. Page claimed Ferguson said Schlichting left because no one on the board would listen to her.

In her resignation letter to Gov. Gretchen Whitmer, Schlichting cited the decision to not move forward with an independent review into MSU’s handling of the Nassar scandal as her reason for departing.

“During the last year, though, it has become very clear to me that my commitment to have an independent review of the Nassar situation, and to waive privilege so the truth can come out, is not shared by the MSU Board chair [Dianne Byrum], legacy Board members, and some newer trustees,” Schlichting wrote.

“After the recent decision to not go forward with the independent review/public report, which had been approved by the board, initiated and organized by Trustees Dan Kelly, Kelly Tebay, Brian Mosallam and me, and supported by 3 courageous survivors; I decided I could no longer serve on the Board.”

Ferguson told the Advance he spoke to the Schlichting matter with Page and said the board members simply “wished her well and we moved on.

“She gave her reason and she narrowed it down, and so that’s why she resigned,” Ferguson said. “I stand by my statement with it. She said she wanted to do something else or wanted to be someplace else and all of us wished her well and we just moved on. Nothing but positive things to say to her, about her.”

Ferguson said he believed Schlichting and the board parted on good terms.

“Whatever Nancy did, that was Nancy. We left on, I think, good terms. I thought Byrum did a great job,” Ferguson added. “And Nancy, we thanked her. She’s busy. Everyone said something positive to her and about her. And I stand by that.”

In the most recent episode of “No Filter Sports,” Page reiterated his account of Ferguson calling the Nassar scandal “overblown” after this reporter — seeking further explanation — sent a clarifying question to the podcast’s listed email address. Page said “overblown” was “exactly the term he used. He was trying to sidle away from me. He didn’t want to talk about it. So maybe they’ll [the Advance] have better luck up there with people like Joel Ferguson.”

Ferguson has a long history with the MSU Board of Trustees — he was first elected to it in 1986 — and has been active in Lansing business and civic affairs. He served on both the Lansing City Council and the Ingham County Board of Supervisors. He is a member of the NAACP and has sat on the Lansing YMCA, Boy’s Club, Arthritis Foundation and Junior Achievement boards.

He’s also a big player in Democratic Party politics, having served on the Democratic National Committee (DNC). He helped Jesse Jackson score a surprise 1988 presidential primary victory in Michigan and former President Bill Clinton appointed him to the Federal Home Loan Mortgage Corp. board of directors.

Ferguson isn’t the only member of the university administration to face intense public scrutiny for comments on the Nassar situation.

After Simon resigned in January 2018, GOP former Gov. John Engler took over as interim president at MSU. Emails obtained by the Chronicle of Higher Education published in June 2018 showed Engler falsely accused Rachael Denhollander — the first person to go public with allegations against Nassar — of manipulating survivor outrage so she would receive a “kickback” from her lawyers. That prompted a fresh round of calls for Engler to resign. At a June 2018 board meeting, a motion by Trustee Brian Mosallam to remove Engler was voted down, 6-2.

Ferguson voted against the motion.

In January 2019, Engler faced additional backlash after he told the Detroit News editorial board that some Nassar survivors were “enjoying” their time in the spotlight. Calls for his removal increased and he stepped down, effective Jan. 23, after five of the eight trustees made the request.

Following Engler’s resignation, Ferguson told the Lansing City Pulse the decision to hire Engler was “what was best for MSU at the time.”

“At Michigan State University, with all that noise, our job was to make a decision that was best for us and to make certain our funding and everything else stayed intact,” Ferguson told the City Pulse.

Ferguson also told the City Pulse his “Nassar thing” comment during the WVFN-AM radio interview was also taken out of context in an attempt to demonize him. 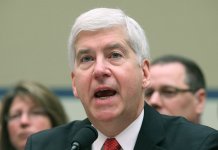