U.S. Rep. Brenda Lawrence (D-Southfield) has backed away from supporting the impeachment of President Donald Trump and would prefer to see him formally reprimanded, or censured.

Lawrence made the comments over the weekend on a podcast hosted by Detroit journalist Charlie LeDuff, saying that she believes that with a presidential election less than one year away and given the partisan divisions in the country, attempting to remove the president from office would be extreme.

“I want him censured,” Lawrence said. “I want it on the record that the House of Representatives did their job and they told this president and any president coming behind him that this is unacceptable behavior and under our Constitution, we will not allow it.”

The congresswoman sought to clarify her comments somewhat in a statement on Tuesday, noting she supports impeachment, but does not believe the U.S. Senate would vote for removal.

“I was an early supporter for impeachment in 2017,” Lawrence said in her statement. “The House Intelligence Committee followed a very thorough process in holding hearings these past two weeks. The information they revealed confirmed that this President has abused the power of his office, therefore continue to support impeachment.”

First elected to Congress in 2014, Lawrence represents parts of the city of Detroit as well as near-suburbs in Oakland and Wayne counties; it is considered the 26th most-reliably Democratic district in the country, according to the Cook Political Report.

“I am a Democrat, but I’m an independent [U.S.] citizen,” Lawrence said on LeDuff’s show of her decision to favor a censure instead of removal.

Lawrence and the rest of the state’s Democratic congressional delegation have publicly supported the impeachment inquiry into Trump since it launched in September. Trump is accused of withholding foreign aid to Ukraine in exchange for investigating former Vice President Joe Biden, one of the Democrats now running for president.

Under the Constitution, the House must determine if there’s adequate evidence to draw up articles of impeachment against the president, which it’s expected to do in the coming weeks. The Senate, which is controlled by Republicans, would be required to hold a trial that would decide whether Trump would be removed from office.

However, the House can stop short of recommending removal from office and vote to formally reprimand the president. The conservative Detroit News editorial board recommended just that over the weekend.

Lawrence told LeDuff she believes there could be bipartisan support for a censure of Trump, noting that her Republican colleagues, in private, are less than happy with Trump’s behavior in office.

“I’m going to have this discussion with the party and the caucus and I think I could get my Republican colleagues who recognize that this is unacceptable,” Lawrence said. “There’s no way you can cut it. It’s unacceptable.” 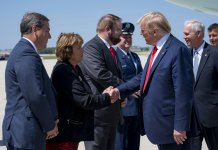