Secretary of State Jocelyn Benson and a group of state lawmakers met with constituents Tuesday night to educate and answer questions about voting reform laws citizens passed in 2018.

“I think these laws serve all of Michigan better. Quite frankly, the only people it doesn’t serve better are politicians,” Hertel said. “The idea is that voters actually get to draw the lines for districts instead of legislators picking who their voters are. I think it benefits all of Michigan and is much better than the old system, which basically put politicians ahead of voters.”

Proposal 3 allows absentee voting for any reason, straight-ticket voting, voter registration up to the day of the election. It also provides the option to register to vote when applying for a driver’s license or state ID.

As the Advance previously reported, more than 2,000 Michiganders registered to vote in the 14 days prior to the election on Nov. 5., and approximately 1,000 people registered on the day of the election.

SOS: 2K registered to vote in Michigan in last 2 weeks

Brixie says these laws will make it easier for college students and young people to get involved in the democratic process.

“One of the most exciting things about the new laws are that suppression of college student voters has ended with these changes in lives,” Brixie said.  “So we have this phenomenal situation now where it is easy for college students to vote. If they want to vote in their hometown, they can, and they can get an absentee ballot for it. If they get excited about people who are running for election and they feel tied to their campus, they can vote in their campus town instead.”

Constituents asked the panel a range of questions about increased accessibility for voters.

Some of the reforms lawmakers are considering to put into place in the future are electronic absentee ballots, making Election Day an official holiday and covering the costs for postage when voters return their absentee ballots. 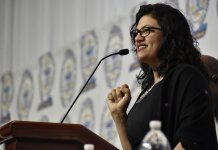