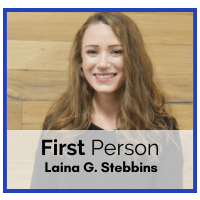 On Monday, I was assigned to cover U.S. Rep. Elissa Slotkin (D-Holly) and her team as they traveled around her district – and beyond – for a full itinerary of Veterans Day events.

I jumped at the chance to follow the congresswoman, who made news last year as the first Democrat to represent Michigan’s 8th District in almost 20 years. (Her surprise victory helped flip the U.S. House). And since Slotkin has an extensive history of working alongside members of the U.S. military, including stints at the Pentagon and in Iraq for the CIA, I figured Veterans Day would be of special importance to her.

Indeed, Slotkin is very serious about honoring the holiday, as her ambitious schedule proved. We started the day early, ended very late, and traveled all over mid-Michigan, leaving barely any time to even grab a bite to eat. All the while, her staffers never complained or made it about themselves.

I found stepping into the nonstop world of a member of Congress and her staff to be utterly exhausting (and it’s probably pretty thankless sometimes). But in a way, I think that’s kind of the point. At the end of the day, it’s not really about you. It’s about giving back to the people who elected you to make their lives better, especially on a day like Veterans Day that commemorates citizens who have given so much of who they are in the name of public service. Especially in near-apocalyptic weather.

At the onset, I pictured a somber day with our time mostly spent at events with Slotkin’s constituents. I figured a little bit of forecasted snow couldn’t be that bad – especially in early November.

I was very wrong. Just in time for our travels, an enormous, early season snowstorm slammed into the state Monday. Some areas received more than a foot of snow. The first day of real snow is always unpleasant on the roads, but this … this was record-breakingly bad.

Out of the 10½ hours I spent with Slotkin’s staff, seven of those hours – seven – were spent in the car. My Google Maps timeline tells me that I traveled more than 141 miles in the back of an SUV that day.

For context: 141 miles is roughly the distance between Michigan’s Capitol in Lansing to Cadillac, normally about a two-hour drive. But our journey was as long as it would normally take to drive from the Capitol to the Upper Peninsula’s Crystal Falls.

I was picked up by a Slotkin staffer before 8 a.m. on Monday. We drove for a half-hour to pick up Slotkin’s spokeswoman, Hannah Lindow, before setting out for the first event of the day: a hometown visit to the Yellow Ribbon Tree Ceremony at Holly Elementary School in Oakland County.

That drive should have taken about an hour, but the snow was not letting up and traffic was starting to get worse. Slotkin was already there when we arrived just past 10 a.m., talking with service members and veterans huddled around the tree, thanking them for their service and giving out hugs.

The Yellow Ribbon Tree was, as you might expect, tied with thick bands of yellow ribbon around its trunk, each one featuring the name of an active service member from the Holly community. It was immediately clear to me that Holly is a city that deeply reveres members of the armed services, which makes sense, considering it is also the location of a federal military cemetery (our next stop).

I was introduced to Slotkin and shook her hand under the tree. Before I had any time to ask questions, we had to pile into cars and take off again.

After 40 minutes of dirt-road driving, we pulled into the parking lot at the Great Lakes National Cemetery for its 15th annual Veterans Day ceremony. I was in awe of the scale of the burial grounds; the foggy, snowy weather obscured visibility and made the clean rows of 44,000 white gravestones seem to go on forever. Lake Fagan, which looked like it was verge of freezing over already, was just beyond a row of tall flags that disappeared into the ice fog.

Slotkin was set to deliver remarks and participate in a wreath-laying ceremony alongside fellow U.S. Reps. Haley Stevens (D-Rochester Hills) and Paul Mitchell (R-Dryden Twp.). Slotkin and Mitchell traveled together to the southern border in July as members of the bipartisan Problem Solvers Caucus and toured Texas migrant detention facilities, along with U.S. Rep. Fred Upton (R-St. Joseph).

Stevens represents the 11th District, which borders Slotkin’s district. When both women won last November, this meant Oakland County was entirely represented by Democrats in Congress for the first time since the 1930s. (The other members representing the county are U.S. Reps. Andy Levin (D-Bloomfield Twp.) of the 9th District and Brenda Lawrence (D-Southfield) of the 14th).

I took a seat in the last row of the “VIP” section, situated to the rear-left of the speaker’s tent and opposite of the choir. Sitting directly behind Slotkin, I realized we both wear the same obscure Scandinavian winter coat brand. (I had a lot of time to notice things like this).

As the small tent above the podium swayed and let loose a mound of snowfall onto us with each big gust, I became acutely aware of how the geography of a sprawling federal cemetery offered absolutely no reprieve from the wind. The temperature hung around 28 degrees, and the windchill of about 18 degrees in the open amphitheater made it feel much colder.

But even as I rapidly lost feeling in my fingers and toes (and face), I was aware of the solemnity of the event. The chairs were packed, despite the miserable weather. There were veterans; Holly-area residents; local officials and community leaders; and members of the U.S. Army, Marine Corps, Navy, Air Force, Coast Guard, Reserves and National Guard. It was an impressive turnout.

Local choirs sang a musical prelude before several local figures and members of the Great Lakes National Cemetery Advisory Council gave welcoming remarks. There was a presentation of colors, pledge of allegiance and a national anthem performance. U.S. Army Major General Brian P. Cummings, the keynote speaker, talked about public service and shared anecdotes about his former service members with the crowd.

The snow and wind were unrelenting. I was eternally grateful that one of Slotkin’s staffers slipped me a hand warmer pouch.

Slotkin, Stevens and Mitchell all addressed the crowd and took part in the wreath-laying ceremony. There was choir music, a rifle salute, taps and a bagpipe performance, and more music before closing remarks. The fact that so many people braved the cold stood as a testament to the event’s significance.

Slotkin’s 2 p.m. event, which involved service dogs and their veteran owners, was canceled due to weather (a sad, but understandable development). Now faced with a large gap in the itinerary, Slotkin’s team decided she should join her husband, Dave Moore, at the American Legion about 20 miles away in Oxford. We began an icy 1-hour-and-40-minute-long drive.

Slotkin and Moore, a U.S. Army colonel and retired Apache helicopter pilot, strolled around the wood-paneled building together, introducing themselves to veterans eating lunch and listening to their stories. The ease at which they connected with veterans came as no surprise. The couple met in Baghdad during the Iraq war and both have extensive backgrounds working with U.S. military operations. (Moore’s two daughters also are active members of the armed forces). There were warm conversations, laughs and hugs all around.

We left at about 2:15 p.m. and (incorrectly) believed we would be at least somewhat on time to the final scheduled event of the day, which was set to start at 4 p.m. in Ann Arbor. Waze and Google Maps told us it would probably take an hour and 20 minutes to get there – maybe a little more.

By the time we rolled into the parking lot, somehow simultaneously tired and on-edge thanks to the terrifying road conditions and dozens of accident-related slowdowns, it was 5:40 p.m. We had missed the entire event.

The Veterans Day panel on national intelligence had been hosted by the University of Michigan’s Gerald R. Ford School of Public Policy. It also featured Lt. Gen. James Clapper, former director of National Intelligence, and Lt. Gen. Michael Nagata, formerly of the National Counterterrorism Center. Slotkin had somehow beaten us, and was already surrounded by a throng of U of M students and community members waiting for their turn to ask her a question.

As I learned by looking back at the event’s livestream, Slotkin had arrived in time to participate in the last 25 minutes of the panel discussion.

Having reached the proverbial finish line, I took a breath, ate a cucumber slice stuffed with some kind of pâté from the hors d’oeuvres table (one of the only things I ate all day), and waited for my time to (finally) speak with Slotkin one-on-one. It was my first and only opportunity for an interview with her during our almost 11-hour day. (You can read the transcript of our conversation here).

After we wrapped up, I was relieved to finally be able to head home … before Lindow informed me that the original plan to drive me back to Lansing that night had gone awry. The congresswoman was invited to a dinner event and was quickly whisked away after our interview.

Suddenly, I was stranded in Ann Arbor with no car, no ride home, a rapidly dying phone, and no way to charge it.

“We can’t kidnap the Michigan Advance reporter!” one Slotkin staffer joked to another on the phone.

Running out of options, I bundled up once again and braced myself for a cold walk to two liquor stores down the street in pursuit of a Google Pixel phone charger. Neither store had it. Then, upon my return to Weill Hall, I got locked out of the building – because of course.

Luckily, my boyfriend lives in Ann Arbor, so I had a place to stay (although it took him about 45 minutes to pick me up). To make a very long story short, I was able to get back to Lansing about 24 hours after my adventure began, thanks to my dad.

To wrap up this day of icy chaos, I leave you with two final thoughts:

One, if any I had to trail any politician on Veterans Day, I think I picked pretty well with Elissa Slotkin.

Two, I am very thankful to be a journalist and not a campaign staffer.

If you need me, I’ll be indoors for a while. 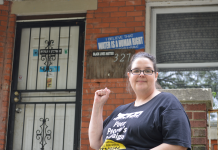