Home Commentary Susan J. Demas: When it comes to Trump, the brazenness is the...
Facebook
Twitter
Email
Print

President Donald Trump will almost certainly be impeached — it’s now just a matter of narrowing down the list of high crimes and misdemeanors and checking it twice.

But as details emerge every day of his not-very-sophisticated plot to allegedly extort the Ukraine government into smearing a potential 2020 rival, former Vice President Joe Biden, Trump and his comrades have gone back to a familiar playbook. They accuse their enemies of all of their transgressions and feign outrage, causing others to marvel at their apparent allergy to self-awareness.

It’s all about making liberal heads go “splodey,” as Sarah Palin, the former poet laureate of modern conservatism, once giggled.

That’s why you have Trump thundering at a rally that Biden is guilty of a “quid pro quo” hours after his chief of staff, Mick Mulvaney, copped to the president doing that in Ukraine and shrugging it off.

The president frequently yells about the “terrible foreign corruption of the Bidens,” despite his Ukraine dealings, former National Security Adviser Mike Flynn being a registered agent for Turkey (which just got an assist from Trump with withdrawing from Syria) and the Mueller report detailing extensive dealings between senior Trump campaign officials, including his son, and Russian agents in 2016.

Speaking of Donald Trump Jr., when he’s not outing the whistleblower in the Ukraine probe and subjecting them to grave harm, something that makes Watergate shenanigans look like child’s play, he’s busy accusing Biden’s son, Hunter, of benefiting from nepotism.

I’m not sure who really buys that Don Jr., who is pretty much synonymous with the “large adult son” meme, would be able to earn an Ivy League education and captain of industry credentials if his name weren’t Trump.

Let’s also recall that Don. Jr. is not supposed to have any connection to the government, as he runs Trump family businesses, which have somehow made millions since the senior Trump won the presidency and charge taxpayers for trips to Trump properties (although the president still refuses to release his tax returns.) Trump’s charity was just ordered to pay $2 million for fraud. And Don Jr., along with siblings Eric and Ivanka, are all still making millions overseas on business deals.

Ivanka does, in fact, work for the White House in an amorphous “senior adviser” role that apparently qualifies her to take the president’s place in interacting with heads of state at summits. Because she and her husband — Jared Kushner, Trump’s jack of all trades in the West Wing — rather transparently serve as key sources for major D.C. reporters, the couple tends to avoid the sneering coverage her brothers net.

But that doesn’t change the fact that Ivanka also engages in the same playbook of misdirection and deception. Her primary role is to make her father — who ran on an anti-immigrant platform, has called them rapists and murderers and whose administration now puts migrant children in cages — still seem socially acceptable to white suburban women on economic grounds.

So even as there were 43 new allegations last month that Trump committed sexual assault, Ivanka keeps pushing her “women’s empowerment” agenda with a straight face and tweeting that women are “crushing it” in her daddy’s economy.

There’s not much that fills Trump and his allies with unfettered joy like saying things that are so outrageous, so far-removed from reality — especially about their enemies — that it causes any thinking person to ponder if they really heard them correctly.

It’s thoroughly exhausting and often demoralizing, which is the point. These manipulations are textbook propaganda.

And it’s all intended to cause reporters to wrestle with how to cover such flamboyant bullshit and hopefully fail to convey the gravity of the situation because it’s frankly overwhelming, especially in tandem with the sheer frequency of Trump’s lies, which the Washington Post had at 13,435 during his term as of Oct. 14. Even CNN’s intrepid fact-checker Daniel Dale, who had watched hundreds of Trump’s speeches and impressively live-tweets corrections, had to temporarily wave the white flag during a Louisiana event this week.

Trump says the whistleblower's source probably does not exist, which makes no sense. He is saying false/misleading/bizarre things in rapid succession, faster than I can type.

The Atlantic’s Adam Serwer eloquently described Trump’s policies and politics with his brilliant 2018 essay, “The cruelty is the point.” I believe the brazenness of his attacks and blistering hypocrisy is another layer.

Anyone who’s dealt with serial liars and narcissists knows that they only become emboldened when they get away with it. That’s why Trump’s schtick has been on steroids for the 2020 election — and we still have almost an entire year to go.

Susan J. Demas: Trump is an existential threat to journalism

The end game of Trump’s audacious accusations and thug-like approach to governance is that he will, almost certainly, order a government investigation into his Democratic opponent, no matter who it is (which is why, in many ways, the hunt for a supposedly unassailable nominee is pointless). Anyone who says this wouldn’t result in his rival being charged with crimes hasn’t been paying attention.

This started in 2016 with the “Lock her up!” chants against Hillary Clinton, which too many pundits pretended were no big deal because ugh, Hillz was the worst. But yes, threatening to throw your opponent in jail is banana republic stuff, even if both-sides analysts say they’re the same (and Hillary’s Chipotle order was super-annoying or whatever else they were sniffing about that day).

Those chants continue at his 2020 rallies against Clinton, but now Biden also is a target.

Consider Trump’s campaign against Clinton to be a dry run. Now Trump controls the levers of power. Unless the GOP-controlled U.S. Senate steps in to remove him after impeachment, really, what’s stopping the president from making good on his threats when he has everything to lose? 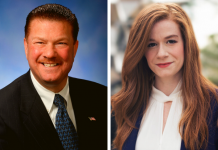