The union will now have to reach similar deals at Ford and Fiat-Chrysler, with the next round of negotiations reportedly set to occur at Ford.

The contract includes a pathway to full-time work for temporary workers, a large part of the company’s workforce since the Great Recession and a major sticking point throughout negotiations.

It also provides gains for both salaried and hourly workers. Key tenets of the deal are an $11,000 per member signing bonus, performance bonuses, two 3% annual raises and two 4% lump sum payments, and health care costs will remain the same.

“General Motors members have spoken,” Terry Dittes, UAW vice president and director of the UAW-GM Department, said in a statement. “We are all so incredibly proud of UAW-GM members who captured the hearts and minds of a nation. Their sacrifice and courageous stand addressed the two-tier [wage] structure and permanent temporary worker classification that has plagued working class Americans.”

Work at GM facilities is set to commence over the weekend or on Monday morning, according to the company.

“We delivered a contract that recognizes our employees for the important contributions they make to the overall success of the company, with a strong wage and benefit package and additional investment and job growth in our U.S. operations,” Mary Barra, GM Chairman and CEO, said in a statement.

Sixty percent of workers at Local 598 in Flint supported the contract. At the Detroit-Hamtramck Assembly Plant, which had been slated to close but instead will remain operational and build electric pickup trucks, workers overwhelmingly supported the deal.

Still, GM plans to close a handful of plants, including the Lordstown, Ohio, assembly facility and that’s led to consternation, and some “no” votes, according to news reports.

Anderson Economic Group, an East Lansing economic consulting group, summarizes that the contract offers big wins for workers and “big costs” for GM, to the tune of about $485 million.

Earlier this week AEG estimated that GM has lost about $1.75 billion in revenue since the strike began on Sept. 16. The strike has cost GM and supplier workers about $989 million, according to the AEG analysis.

Union officials had acknowledged they were ready for a lengthy strike, which became the longest work stoppage for autoworkers in the U.S. in 50 years, according to the UAW.

Political leaders around the state quickly praised the ratification of the contract, including Gov. Gretchen Whitmer.

“This is good news for our working families and our economy,” Whitmer said in a statement. “Michiganders are some of the hardest working people in this country, and they deserve to be treated with respect. I was proud to stand with the UAW as they negotiated for more American jobs, better wages, and good benefits, and my administration is committed to continuing our work to close the skills gap and protect hardworking Michigan families.” 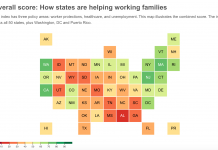 Oxfam: Michigan is the 13th best state for workers during COVID-19