Legislation introduced this month in the Michigan Legislature could help stop perpetrators from finding victims of domestic or sexual violence again.

The bipartisan Address Confidentiality Act would require all government entities to use a confidential “designated address” to mail items, such as voter registrations and driver licenses to victims of violence.

Victims of crimes — and those who feel their life and well-being are at risk of domestic and sexual violence, stalking, human trafficking or other physical harm — would be able to apply to be a part of the “Address Confidentiality Program.” No conviction is required, just a signed affidavit showing the applicant feels they are at risk. Applicants can apply on behalf of their child or ward who is at risk.

“It came to us really from hearing from survivors and their stories and the need to protect their home addresses when going through trauma,” Pagan said. “Survivors, they want to heal and take the time to move on. Yet if their abuser* continues to have easy access to where they are, it’s not a good situation; the violence continues.”

The Senate bills are expected to be on the floor for a vote next week, Pagan said, and then the House bills can follow suit.

House Bill 5054, sponsored by state Rep. Diana Farrington (R-Utica), amends the Sexual Assault Victim’s Access to Justice Act that allows victims to request information from law enforcement. Law enforcement can respond to information requests from victims by phone, mail or email. However, this bill would require the response be mailed to the address designated by a confidentiality program. House Bills 5056-5058 address additional details for law enforcement to use the addresses from the confidentiality program.

House Bill 5055, sponsored by state Rep. Julie Calley (R-Portland), amends the Code for Criminal Procedure. Under the code, after a peace officer has investigated or intervened in a domestic violence incident, they are required to provide the victim with a notice, including:

This bill would add that every victim or person thought to have been a victim during an investigation receives must receive a notice that includes information about applying to the Department of the Attorney General for participation in the Address Confidentiality Program.

The House Bills were formed by the Progressive Women’s Caucus. Pagan said these bills, though largely backed by female lawmakers, are meant to be all-inclusive for those who feel at risk of violence. The bills are meant to establish safety and be a resource victims can run to in the face of danger “just like someone might flee to a shelter.”

The caucus is introducing more legislation next week as a part of Domestic Violence Awareness Month, Pagan said.

These bills will provide: 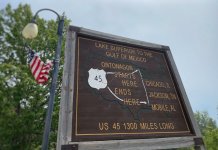