Amid heightened public awareness and increased legislative pressure, the Pentagon’s Office of Inspector General says it’s going to study its use of the water contaminants known as PFAS chemicals at military bases around the country, including the former Wurtsmith Air Force Base in Oscoda.

That news comes via U.S. Reps. Dan Kildee (D-Flint) and Brian Fitzpatrick (R-Pa.), co-chairs of Congress’ bipartisan PFAS Task Force. The two lawmakers asked for the review back in July.

PFAS, or per- and polyfluoroalkyl substances, were used in everything from firefighting foam to clothing and nonstick pans and have caused alarm in communities across the country. They have been linked to cancer and other serious health problems, and environmental and public health advocates want faster cleanup and strict guidelines for the allowable limits of the chemicals in drinking water.

Some studies in people have shown that exposure to certain PFAS might adversely impact growth of infants and children, lower a woman’s chance of getting pregnant, increase cholesterol levels and increase the risk for some cancers, according to the U.S. Centers for Disease Control and Prevention (CDC).

Michigan Reps. to Trump: Come to the Midwest and defend your PFAS policies

“Families in Michigan and across the country continue to grapple with the consequences of PFAS chemical contamination in their communities. Due to the Defense Department’s use of these dangerous chemicals, many service members and their families are at risk of exposure and the subsequent health effects. It’s long past time for the Defense Department to prioritize clean-up of these dangerous chemicals,” said Kildee. “I was proud to lead this bipartisan group of lawmakers asking the Inspector General for an investigation and I’m pleased they will be conducting an independent review.”

A recent report found that Michigan has the most sites in the country known to be contaminated with PFAS, although experts say that’s likely because Michigan has done thorough testing whereas other states have not.

“It is unacceptable that the Defense Department put the health of Pennsylvania families at risk with these chemicals, whether it was intended or unintended. Every American has a right to clean drinking water. The federal government created this health crisis and it is important that the government is starting to take responsibility.” Fitzpatrick said in a joint statement released by his office. “I’m happy to see that the Inspector General will be further reviewing this issue and look forward to seeing their report.”

The DoD’s study comes on top of last month’s announcement that the CDC’s Agency for Toxic Substances and Disease Registry will team up with the nonprofit research group RTI International and the Pennsylvania Department of Health to assess PFAS exposures in Montgomery and Bucks Counties.

Last month, U.S. Rep. Madeleine, Dean (D-Pa) announced she was co-sponsoring legislation requiring the Pentagon to test kids living on bases across the nation to track their exposure to the toxic chemical compounds.

In all, 33 states across the country have documented PFAS contamination near military sites. 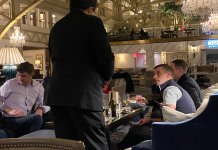 Pentagon announces it will study PFAS at military bases