A Jewish synagogue in Grand Rapids was the target of anti-Semitic graffiti over the weekend.

The graffiti at Temple Emanuel on East Fulton Street was found Sunday morning. Rabbi Michael Schadick declined to share the specific nature of it with the Advance, citing concerns of copycat incidents.

A notice from the Jewish Federation of Grand Rapids said the messages were posted on entrances to the temple. Sunday evening marks the first night of the Jewish holiday of Sukkot.

Sunday school and other planned activities at the temple continued without interruption, according to the Jewish Federation.

“Our Jewish community is stronger together,” the Jewish Federation said in a statement.

The graffiti appeared to have been removed from the building when an Advance reporter visited on Sunday afternoon.

A spokesman for the Grand Rapids Police Department confirmed that an incident report had been filed, but said an investigation was still underway and declined to share further details pending the completion of the investigation, likely on Monday.

The 1950s-era Reform Jewish temple has been noted for its Modernist-style architecture.

Last month, Temple Jacob in Hancock in the Upper Peninsula was defaced with Nazi symbols, the Associated Press reported. The graffiti was found the same day as the Parade of Nations, a “community-wide event that includes a parade and a multicultural festival,” according to AP.

The Anti-Defamation League (ADL) recorded 1,879 anti-Semitic incidents nationally last year, a 105% increase over the previous year. That’s largely due to the terrorist attack at the Tree of Life Synagogue in Pittsburgh that left 11 people dead.

Michigan Attorney General Dana Nessel, who is Jewish, has also reported receiving anti-Semitic threats since taking office at the start of the year. 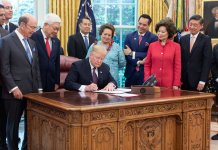