Last year was a banner year for progressive ballot proposals in Michigan, with measures legalizing marijuana, going after gerrymandering and expanding voting rights all passing easily.

And you know it was successful, because the GOP-controlled Legislature promptly clamped down on the process with a Lame Duck law, which a judge last week partly struck down.

As the glow of Democratic victories at the top of the ballot fades — with the current GOP Legislature hell-bent on blocking the priorities of Gov. Gretchen Whitmer, Attorney General Dana Nessel and Secretary of State Jocelyn Benson in the budget and and beyond — progressives are once again looking to initiatives as the way to actually accomplish change in Michigan.

There are any number of issues they could tackle, a progressive income tax, green energy, no-fault auto insurance, abortion rights, lobbying reform and more. Two big groups, Progress Michigan and Voters Not Politicians — the latter spearheaded the 2018 anti-gerrymandering proposal — have laid down a marker by hinting about ballot measures for next year, but haven’t announced anything definitive.

So far, the big 2020 ballot questions are on the other side of the political spectrum with two anti-abortion measures (and, as I’ve noted, the plan likely is for the GOP-led Legislature just to adopt them instead of having citizens vote on them anyway). There also was some early buzz about ranked-choice voting, which attracted interest from liberals and libertarians alike.

There are a couple big roadblocks for liberals in 2020. The biggest potential issue is the presidential election is sucking away all the oxygen — and a big chunk of available money that groups typically need to get questions on the ballot and for the ensuing campaign. There’s also a top 10 national U.S. Senate race with U.S. Sen. Gary Peters (D-Bloomfield Twp.) up for reelection.

Democrats and progressives never have enough money, unlike Republicans (just look at how President Donald Trump’s fundraising is going gangbusters, even amid near-constant scandal). With Trump dominating everything in 2020, that could hurt Dems in down-ballot races, although targeted freshmen U.S. Reps. Haley Stevens (D-Rochester) and Elissa Slotkin (D-Holly) have been building impressive war chests.

Still, something’s got to give, and it may mean that there’s precious little funding for issues at the bottom of the ballot.

That dovetails into the next problem of infighting. You almost can’t help but think of the old Will Rogers maxim (“I am not a member of any organized party — I am a Democrat”). But as a broad coalition with myriad interests — labor, environment, women’s rights, economic justice, LGBTQ rights, race equity and more — there’s going to be tension over sometimes conflicting priorities, especially with limited money. So yeah, if some folks seem particularly snappish or power-trippy lately, it’s probably not your imagination.

Let’s take a look at a few issues that could go before voters next year.

The arguably most crucial priority is enacting a progressive income tax in light of Republicans’ obstinance in fixing our crumbling roads, schools and more in the budget. Michigan’s tax system is woefully outdated and Republicans who ran the state for eight years only made it worse by cutting taxes for corporations, while in many cases, raising taxes on individuals by axing key tax credits for kids and charitable donations.

More than three-quarters of voters back a progressive income tax, as taxing the rich is a very popular idea, especially when it likely means a tax cut for you. But this would take a constitutional amendment and probably an eight-figure budget, as groups like the Michigan Chamber of Commerce will spend whatever it takes to defeat it. It’s wholly unclear who has the deep pockets to fund this measure.

Besides, plenty of interests have their own priorities. Health groups and trial lawyers are none too pleased over Whitmer signing auto insurance reform this year — something that was never supposed to happen under a Democratic governor — and could look to try and undo that at the ballot box, although that would be a steep climb.

There’s also been talk about trying to stem the tide of anti-abortion legislation. A grassroots group already is looking into repealing two anti-abortion measures before they’ve been enacted. In July, the Advance asked state and national Planned Parenthood officials about a possible constitutional amendment enshrining the right to privacy — as abortion would be illegal in Michigan if the U.S. Supreme Court overturns Roe v. Wade — but they demurred.

Progressives have gone all-in on the Green New Deal and Medicare for All as defining 2020 campaign issues, but there’s been little chatter about putting these issues on Michigan’s ballot next year. Last year, there was a renewable energy measure that didn’t make the ballot, but it wasn’t as sweeping as the GND. And although MFA was a key issue for Abdul El-Sayed’s ultimately unsuccessful progressive ’18 gubernatorial campaign (he had a “Michicare” plan), it seems like the focus for that issue is on the presidential race next year.

Meanwhile, Voters Not Politicians held a press conference in July and oddly didn’t announce anything, but leaders said the group could pop another initiative in 2020 or 2022. The organization is broadening its interests into ethics and government transparency.

Progress Michigan followed in VNP’s vague footsteps with a September press release announcing the “Coalition to Close Lansing Loopholes” ballot committee “pushing for changes to Michigan’s democracy and economy.” No details have been released, but there’s long been an interest in lobbying and campaign finance reforms.

For those who weren’t around in 2008, Google “Reform Michigan Government Now,” the sweeping constitutional amendment (which reporters snickered was a “bedsheet ballot” since it was so long). It got booted from the ballot for being overly broad, but would have eliminated members of Michigan’s judiciary and Legislature, cut the pay for the governor, Legislature and judges and instilled more measures aimed at helping Democrats. That’s probably as good a guide as any for ballot initiative fodder.

As always, there’s no shortage of progressive imagination for change — it’s just a matter of resources and who snags them. 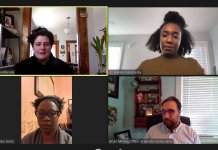