Randy Freeman, president of United Auto Workers (UAW) Local 652 in Lansing, says the union is ready for a prolonged strike if necessary.

Freeman pointed to three issues that he says need to be addressed before the strike that began Monday morning can be resolved.

Freeman acknowledged that addressing those issues could lead to an extended work stoppage.

“If we’re sitting and not talking back and forth it could be a long one,” he said.

At least in the short term, that could lead to some financial hardship for rank-and-file workers earning the $250 per week strike pay as outlined in the UAW constitution.

GM has reportedly offered $7 billion in new investment that included rebooting “unallocated” assembly plants in Michigan and Ohio, as well as an improved profit-sharing formula, wage increases and other benefits.

With the strike just a day old and talks between GM and the UAW ongoing, major suppliers are in a wait-and-see mode, but carrying on with their normal production schedules, Crain’s Detroit reported on Sunday.

Teamsters are refusing to deliver vehicles in solidarity, the Detroit Free Press reported Monday, but GM says it has plenty of inventory, for now.

“Teamsters and the UAW have a decades-long relationship of having each other’s back,” Teamsters General President Jim Hoffa told Fox Business.

Kristin Dziczek, vice president of industry, labor and economics at the Center for Automotive Research (CAR), an independent automotive research organization in Ann Arbor, said it would likely take two to three weeks for the effects of a strike to start taking a broader economic toll.

To understand this strike, Dziczek says one has to look back at the last national UAW strike in 2007, just ahead of the Great Recession and where both GM and Fiat-Chrysler received federal bailouts. The unions at that time made several concessions such as adopting a “second-tier” wage system in which lower-seniority workers earn about half the wage of their higher seniority counterparts.

“Things were pretty darn desperate and the UAW agreed to some very transformational things,” Dziczek said of the 2007 agreements.

But after a decade of economic growth and billions of dollars in profits for automotive companies, Dziczek said the unions are thinking it’s time to get something back.

“There’s been 10 years of very profitable operations since then and I think union members look at that and say, ‘Well if we’re ever going to get that stuff back it better be before the next downturn,’ ” she said, noting that another recession appears to be on the horizon.

Indeed, in 2014, Ford Motor Co. Chairman Bill Ford told CNBC that his company — which did not receive a federal bailout — was saved because of union concessions.

The UAW strike — which is, so far, limited to workers at GM, the union’s prime company for negotiations — is playing out at the same time that the union is the target of a federal investigation over embezzlement allegations that has led to charges against 10 union officials and multiple convictions.

Freeman with the Lansing UAW Local said he’s hopeful that the contract negotiations and the embezzlement scandal remain separate.

“I don’t want to confuse the issues with a couple bad characters that we have in the UAW because you can look anywhere and find bad characters, whether you’re looking at a church, a school, a financial institution,” Freeman said. “Anywhere you look, you’re going to find bad characters, but it doesn’t mean the whole organization is a mess. We want to take care of those issues, resolve them, along with the contract at the same time.”

Dziczek dismissed a common notion that the scandal is being used as a way for the auto companies to weaken the union’s position. Rather, she said it’s important for top union officials to have credibility when negotiating with company executives so they can sell a contract to rank-and-file members.

So far at least, Democratic officials — historic allies with the UAW —  in Michigan and beyond have been outspoken in their support for the workers to strike in their effort to secure a contract.

That support includes Gov. Gretchen Whitmer, who stopped by the picket line outside the GM Grand River plant just outside downtown Lansing on Monday morning to talk with workers and deliver donuts.

Always proud to stand with UAW members fighting for good jobs and fair wages. I’m hopeful the UAW and GM can negotiate and ratify a contract quickly so Michigan’s autoworkers can get back on the job as soon as possible, as this is so important to our economy. pic.twitter.com/BnVAFIlm9D

The Advance sought comment from some of those picketing workers later on Monday, but they deferred to their local.

Freeman, with the UAW, touted the support of Whitmer and other Democratic politicians, as well as the broader community.

“We’ve been here and built cars for over 100 years. We started Oldsmobile in Lansing and we’ve built some quality vehicles and we’ve got hard-working people,” Freeman said. “We’ve got a lot of retirees that support us, we’ve got the community that supports us, they’re behind us. I think we have a good relationship here in Lansing so we want to build on that relationship with the community.” 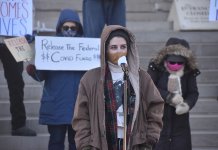