Republicans leaders in the Michigan Legislature said Friday they plan to move ahead with their own budget proposals next week, without consensus from Democratic Gov. Gretchen Whitmer.

The Republican leadership has flatly resisted Whitmer’s calls for a 45-cent gas tax increase to raise $2.5 billion for roads and bridges, while Whitmer over the summer rejected a number of counter-proposals developed by the GOP, the details of which have not been released.

With just over three weeks to go before the start of the state’s 2020 Fiscal Year on Oct. 1 — Whitmer must sign a budget before that to avert a partial government shutdown — Republicans say they can’t wait any longer.

“All along, the Senate promised to deliver a budget on time and we intend to keep that promise. Discussions on roads with my governor and legislative leaders can continue, but the Senate will not tie the fate of the budget to a deal on roads,” state Senate Majority Leader Mike Shirkey (R-Clarklake) said in a statement on Friday.

“We have spent many months engaged in conversations with my governor in an effort to reach consensus on a roads plan,” Shirkey said. “With all due respect to my governor’s desire to see roads and a budget plan move in concert, we can no longer keep our schools and municipalities waiting while my governor rejects road proposals.”

Shirkey and state House Appropriations Chair Shane Hernandez (R-Port Huron) said the budget they plan to deliver to Whitmer will have additional funding for roads and education. Hernandez noted that the budget will accomplish that “without asking taxpayers to dig deeper into their wallets.”

Whitmer spokeswoman Tiffany Brown, in a Friday afternoon statement, said the GOP actions “are leading the state toward a Trump-style shutdown by them taking actions that don’t include input from the Executive Office.” Brown added that “the Governor remains committed to working with anyone who wants to work with her on real solutions to get the budget done.”*

The governor has previously said the Republican road-funding proposals cut money for schools, something the legislative leaders deny.

The administration has long maintained that Whitmer will not sign “a budget that doesn’t include a real plan to fix the roads.”

Next week, joint House and Senate conference committees will begin meeting to approve budget bills. There are currently six such meetings scheduled for Thursday to consider budgets for the Department of Natural Resources, School Aid Fund and others.

Because of the limited time to fulfill its constitutional requirement of passing a balanced budget before the beginning of the fiscal year, GOP lawmakers — who took a two-month summer break — say they must act now and accuse Whitmer of holding up the process by insisting on a 45-cent gas tax.

“She may say she’s not married to her original goal of raising the tax by 45 cents per gallon, but she sure acts like she is – rejecting every alternative we proposed over the summer,” Hernandez said in a statement. “We can’t wait on her any longer. We are moving forward as quickly as possible to approve a final budget and send the plan to her desk.” 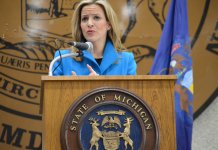