Greig, a member of the so-called “quadrant” of legislative chamber leaders, made her comments one day after divided rhetoric between Whitmer and GOP leaders ticked up considerably.

Asked later whether she thinks the gas tax proposal is dead, Greig responded, “Yeah, I think it is.”

Greig and some other House Democrats have proposed increasing business taxes and fees on heavy trucks, coupled with a lower gas tax increase. Greig, along with state Reps. Jon Hoadley (D-Kalamazoo), Yousef Rabhi (D-Ann Arbor) and Tim Sneller (D-Burton), introduced such proposals back in June, but they have not gained traction in the GOP-led Legislature.

“I think we have to have these other options and we have to come to the table in an honest, transparent way and really make these hard decisions [about] how can everyone contribute to the success of a state,” Greig said.

It’s in those meetings where several GOP counter-proposals have been discussed, but remain largely secret due to a confidentiality agreement the group struck.

Greig told reporters she would honor that agreement, but called one Republican idea that’s been reported — bonding off teacher pensions — a “ridiculous idea.”

In response to Greig’s comments, Whitmer’s office reiterated that she welcomes other ideas, but stressed that she’s the only party to put forth a “comprehensive” plan for roads.

“Governor Whitmer has made it clear that she’s not signing a budget that doesn’t include a real plan to fix the roads,” said Whitmer Communications Director Zack Pohl in an emailed statement. “As she stated yesterday, she is not wedded to every part of her budget recommendation, but at this time, she is the only person to introduce a comprehensive budget proposal that raises the $2.5 billion in new revenue we need each year to improve public education, close the skills gap, clean up our drinking water, and fix the damn roads.” 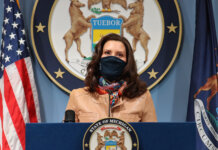