With 33 days left to prevent a partial shutdown of state government, the war of words between Democratic Gov. Gretchen Whitmer and legislative Republicans ramped up considerably on Wednesday.

Typically, lawmakers and the governor’s office will negotiate certain spending targets in different areas of the state budget. But state Senate GOP spokeswoman Amber McCann confirmed to the Advance that hasn’t happened and it doesn’t appear to be planned.

Instead, Senate Majority Leader Mike Shirkey (R-Clarklake) and House Speaker Lee Chatfield (R-Levering) seem prepared to simply drop a Fiscal Year 2020 budget on the governor’s doorstep and see where it goes from there.

“The Governor has not engaged in any way to finalize a budget, nor has she engaged in a negotiation on roads,” McCann said when asked about whether spending targets were being negotiated. “Under the circumstances, the Majority Leader is moving forward with the House to deliver a budget.”

The war of words, tweets, memes and GIFs began ramping up on Wednesday, apparently after Whitmer, Shirkey and Chatfield met, according to House GOP spokesman Gideon D’Assandro.

In a morning press conference, Whitmer accused Republicans of “screwing around” rather than working on a comprehensive budget.

Meanwhile, Shirkey said his caucus will proceed with a normal budget process separate from roads and Chatfield called on the governor to drop her proposed 45-cent gas tax increase for infrastructure.

Both Chatfield and Shirkey downplayed any notion that there needed to be the concern of a shutdown.

“There is no budget crisis,” Shirkey told reporters. “This is a fabricated crisis by my governor to try to tie in roads to the budget, which I agreed to try to do at the beginning of the year.”

Shirkey said the GOP leaders’ budget plan will be in Whitmer’s hands well ahead of the Sept. 30 deadline when the state’s 2020 Fiscal Year begins. He said that it will include “record spending both for education, and additional funding for roads, some of which will be ongoing.” Shirkey added it would “be a very responsible budget, that [will] have lots of elements in it that she will like. And then we’ll see what happens after that.”

The Advance asked whether Whitmer would move off her long-held position that a final budget she’s willing to sign must include somewhere in the range of $2 billion in new annual funding for roads.

“Governor Whitmer has made it clear that she’s not signing a budget that doesn’t include a real plan to fix the roads. She is the only person to introduce a comprehensive budget proposal that invests in education, cleans up our drinking water, closes the skills gap, and fixes the damn roads without diverting money away from our kids’ future to fill potholes. Any budget proposal that doesn’t tackle these issues isn’t a real solution,” Whitmer Communications Director Zack Pohl said.*

But Eric Lupher, a long-time policy observer and the president of the nonpartisan Citizens Research Council of Michigan, said that Whitmer’s goal of tying roads to the budget was “artificial” and “had the effect of attempting to hold legislator’s feet to the fire to try to enact road funding reform.”

In an email, he called out the entire process.

“The whole process is an indictment of what is wrong with our version representative democracy,” Lupher said. “Rather than ideas being introduced in the legislative process and vetted in public hearings, three leaders are negotiating behind closed doors and the rank and file members, as well as the taxpaying public, are waiting for an agreement that they’ll be expected to ratify. No wonder trust in government is waning.”

Speaking with reporters, Chatfield accused Whitmer of holding the budget process hostage by insisting on a 45-cent gas tax increase.

“At this point, there’s no agreement on the roads,” Chatfield said. “However, we’re still working every single day and night to reach an agreement. Unfortunately, the governor is holding up the budget process at this point, because of her insistence on a 45-cent gas tax. House Republicans and Senate are willing to keep all options on the table, but we need to move forward with the budget.”

Some of the state’s leading business groups last week made the push to the GOP Legislature to raise upwards of $2 billion in new revenue for roads, although they did not specifically endorse Whitmer’s plan.

The governor said on Wednesday morning that she’s “not wedded to every aspect of the plan I put on the table, although I’m confident it is the best plan, because no one’s been able to put an alternative out there.”

That, however, is where things get complicated. Whitmer last week rejected “a menu” of possible road-funding proposals presented to her by GOP leaders because she said they would harm school funding, which Republicans deny.

But all parties say they swore to keep roads and budget negotiations private and are so far largely sticking to that, so it’s unclear what specifically was in the GOP proposals.

Whitmer did indicate in her news conference that included were proposals to bond off teacher pensions or refinance the debt payments on those pensions and dedicate the savings toward roads.

However, she flatly rejected those ideas, noting that Republican former Gov. Rick Snyder did the same thing.

“They’re fiscally bad ideas,” Whitmer said. “They take money out of education to fill potholes. It’s not a real solution.”

As the state’s political leaders seem likely to continue bickering in public and maybe, or maybe not, talking behind the scenes, budget administrators are taking the early steps to prepare in the event that the state government goes into a shutdown on the morning of Oct. 1. That’s something that happened briefly in 2007 and 2009.

“There are a ton of questions that have to be answered,” Kolb said. “That’s why you can’t just make the decision tomorrow to shut down. You have to go through the entire decision-making process as you’re dealing with winding down a $57 billion enterprise.” 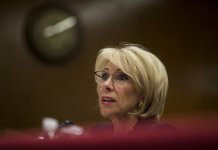 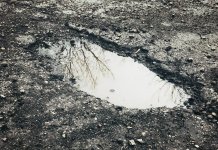