WASHINGTON — The U.S. House on Thursday voted to hike the federal minimum wage to $15 per hour by 2025 — which could mean a pay raise for 1.5 million Michigan workers.

The measure has little chance of being enacted by the GOP-led Senate, but will be widely touted by Democrats heading into the 2020 campaign season. The current federal minimum wage is less than half of that amount — it has been stalled at $7.25 since 2009. This month marked a record for the longest period without raising the minimum wage since it was enacted.

Roughly 1.5 million workers in Michigan — one-third of the state’s workforce — would see a pay increase, according to an analysis from Oxfam.

The legislation passed the chamber by a vote of 231-199, largely along partisan lines. Three Republicans voted in favor of the bill; six Democrats opposed it.

The Michigan delegation was divided 7-7, with U.S. Rep. Justin Amash (I-Cascade Twp.) joining Republicans in voting no. The legislation was co-sponsored by all seven Democratic members of Michigan’s delegation.

“Simply put, there is no place in America where a full-time worker can live on $7.25 an hour, let alone support a family,” said U.S. Rep. Debbie Dingell (D-Dearborn). “By gradually increasing the minimum to $15, we are putting money in the pockets of hardworking men and women. This will be good for workers, good for business, and good for the economy.”

But U.S. Rep. Bill Huizenga (R-Zeeland) called the legislation “misguided” and warned in a statement that it could make it harder for younger workers to get work experience. “Instead of government mandates, Washington should focus on pro-growth policies that strengthen small business job creation and reduce regulatory barriers that hinder innovation, opportunity, and economic expansion.”

The minimum wage in Michigan is $9.45 an hour. A 2018 citizen-led petition drive would have raised it to $12 per hour by 2022, including tipped workers. The GOP-controlled Legislature adopted the petition, keeping it off the ballot. After the election, the Legislature dramatically scaled back the measure to $12.05 by 2030. Tipped workers see their minimum wage rise only to $4.58 by 2030.

The Michigan Supreme Court on Wednesday heard arguments about the legislative maneuver involved in the 2018 state fight.

A $15-per-hour minimum wage stands to boost the pay of about 17 million workers nationwide, according to a recent report from the nonpartisan Congressional Budget Office. Another 10 million workers otherwise earning slightly more than $15 per hour might see their wages rise as well, and the number of people with an annual income below the poverty line in 2025 would fall by 1.3 million, the report estimates.

“The Raise the Wage Act is not just good for workers, it’s good for the economy,” U.S. House Education and Labor Committee Chair Bobby Scott (D-Va.) said on the House floor. Scott is the lead sponsor of the bill.

House Democrats say the measure would provide major benefits for workers back in their districts.

“I am proud to see a new Democratic majority in the House act to give millions of American workers a raise,” U.S. Rep. Dan Kildee (D-Flint) said. “Michiganders are working harder than ever, but their wages have not kept up with rising costs. Raising the minimum wage will help raise the wages of all workers and put more money immediately back in the pockets of workers. Putting more money back in the pockets of the American worker will also help to support small businesses and boost our economy.”

“House Democrats promised to raise wages for Americans workers. Today, we delivered,” Levin said. “… Raising the minimum wage is essential to raising the standard of living for working people in America, and has been a priority of mine since day one in Congress.”

Labor leaders also applauded the vote, like Mike Jackson, executive secretary-treasurer of the Michigan Regional Council of Carpenters and Millwrights.

“We cannot grow our economy without raising wages. American families are struggling to make ends meet and therefore, spend their hard-earned wages on cheaply made goods from China,” Jackson said. “If we want American workers to pay for American goods, we need American companies to pay higher wages,” said House Republicans and other critics of the legislation have stressed the potential to strain small businesses and spur job losses.”

U.S. Rep. Tim Walberg (R-Tipton) said in a floor statement that the legislation will “cause harm to the very people it is supposed to help.” He said that low-income workers without a high school degree “would be hit the hardest.”

The top Republican on the U.S. Education and Labor Committee, U.S. Rep. Virginia Foxx (R-N.C.), called the bill a “radical, risky and unnecessary bill.” Boosting the federal minimum wage by 107%, she said, is a “harmful and unprecedented mandate.”

U.S. Rep. Paul Mitchell (R-Dryden) said in a video posted on Twitter that  “while to some on the surface this may sound like a good idea, in reality the change would do more harm than good — much more harm.

“We are risking great economic damage — massive damage — by taking such drastic steps to change the minimum wage,” he added.

Democrats on Capitol Hill are hoping the bill will give voters a glimpse of what’s possible if they elect a Democrat to the White House in 2020. Most Democrats vying for the nomination have endorsed the $15-per-hour minimum wage, Vox reported. 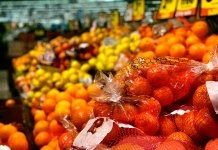