Oregon’s legislature grabbed some unwanted national headlines this week, as Republican state senators fled the state to avoid voting on a cap-and-trade carbon emissions bill — issuing a thinly veiled threat of violence against the state police that caused anti-government militia groups to flock to his support.*

“Send bachelors and come heavily armed,” said Oregon state Sen. Brian Boquist. “I’m not going to be a political prisoner in the state of Oregon. It’s just that simple.”

Members of the Oregon 3 Percenters militia group sprang to Boquist’s defense, and the state’s Capitol even closed on Saturday due to a “possible militia threat.”

The ugly scene led to Democrats’ eventual capitulation on the cap-and-trade bill. It was also the second prominent militia incident in just the last few years for Oregon, following the infamous 2016 takeover of a wildlife refuge by anti-government protesters.

But Oregon isn’t alone as a subject of national rubbernecking over its extra-legal militia action — one of the highest-profile national incidents this decade originated in Michigan, where the movement has deep roots.

In 2010, law enforcement arrested nine members of the Michigan-based Hutaree militia group for allegedly planning violence against both police and civilians, although most were later acquitted. The Hutaree, based in Adrian near the Ohio border, espoused a Christian-oriented violent militarism that so unsettled their fellow militias that one outside militia member joined the group “just to keep an eye on them,” as National Public Radio reported.

Attorneys for the charged Hutaree defended their group as a “social club” they used to “blow off steam,” a far cry from the “radical and extremist fringe group” former FBI Special Agent in Charge of Michigan Andy Arena described in the 2010 announcement of their indictments.

Those attorneys may have been right, however, about the group’s relative isolation within Michigan’s militia ecosystem. In 2010, the Daily Beast reported on how the state’s numerous militia groups rapidly distanced themselves from the Hutaree in the wake of their arrests, with one leader saying, “The majority of the groups that I talk to aren’t out for vigilante justice.”

Amy Cooter, a Vanderbilt sociologist who has closely studied Michigan’s militia movement, described a key distinction between the Hutaree and most of the state’s armed militia groups.

“[University of Hartford historian] Robert Churchill made a distinction between constitutionalist and millenarian militias,” Cooter explained. “The former are more normal, and more prone to being strict constitutionalist types, and they do try to reach out and have connections with other militias of the same type.”

“Constitutionalist” militias, which spread in popularity in the wake of the Waco and Ruby Ridge shootouts in the 1990s, emphasize a strict adherence to the letter of the U.S. Constitution as written, and frequently criticize what they view as a tyrannical and overreaching federal government.

Cooter described them as more prone to avoiding public scrutiny than their “millennarian” counterparts, and said that in her experience they comprise a majority of such groups across the country. She said that a number of unique factors, including the presence of a few charismatic leaders and the state’s natural affinity for outdoor culture, led to the movement’s particularly large growth in Michigan.

“There were some strong personalities [in Michigan] in the 1990s who popularized a way of thinking and organizing people that took hold there, and has been amplified, as well,” Cooter said, adding that “there’s a strong hunting and fishing culture that fits into their individualistic ideas, with the kind of people who like to homestead or be on their own.”

In contrast, the millenarian groups, the Hutaree among them, tend to be more primed for action in pursuit of their goals — up to and including, in some cases, violence.

“Anytime legitimization of racism or violence happens we need to be a little concerned,” Cooter said. “Millenarian groups can be stirred up easily.”

A turning point for militias across the country, and especially within Michigan, was the Oklahoma City bombing of 1995, when Timothy McVeigh along with Lapeer native Terry Nichols attacked the Alfred P. Murrah Federal Building, killing almost 200.

Rumors swirled for years that McVeigh was associated with the Michigan Militia, the state’s most prominent group. It was never proven that McVeigh was an official member of any militia, but the scrutiny that came along with his loose association with the movement, including several visits to Michigan, was formative for the movement.

“The fact that the [Michigan Militia] had to deal with the whole Timothy McVeigh incident solidified their identity in some ways,” Cooter said. ”People who weren’t scared off by that became hardcore and devoted.”

“They very much resent having him be part of their history,” she continued. “My understanding is that after Oklahoma City, militia groups saw a sharp decrease in membership but the core people who stuck around really became loyal and bumped up their recruitment efforts down the road.”

The United States’ biggest spikes in anti-government activity have come during the two most recent Democratic presidential administrations, as noted by the Southern Poverty Law Center. Cooter said that the immediate aftermath of President Donald Trump’s election saw an unexpected bump in militia groups’ membership, but that it’s leveled off as his presidency has become, for lack of a better word, normalized.

“People were so excited to have someone they thought truly represented their interests … in office, and so some people sought out a group like militia to have a bonding experience and shared outlet for that,” Cooter said. “When things settled into a relatively more normal pattern, many of them sort of fell back off into their daily lives.”

She said that the modern “alt-right” movement has relatively little connection with militias as we know them, especially in a state like Michigan where such groups are still wary of newcomers and outsiders in the wake of their association with McVeigh.

As for the 3 Percenters who pledged their support to Oregon’s Republicans last week, Cooter suspects that they’re not likely any closer endeared to the majority of America’s militias.

“The militia movement doesn’t have a ton of respect for the 3 Percenters,” Cooter said.

“They sort of think of them as ‘keyboard heroes.’ But if they’re close to home, or someone they perceive to be a hero of the movement, a few dozen of them can show up for a photo opportunity. It probably won’t get more exciting than that.”

*This story was updated to reflect that Oregon state Sen. Brian Boquist issued a veiled threat of violence on his own part against state police. 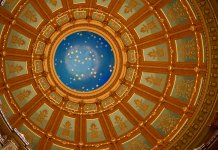