Much has been made of Michigan’s “lost decade”— the period between 2001 and 2010 in which Michigan shed jobs every year.

But Michigan and most other states are dealing with a second “lost decade,” this one involving state government finances.

A new report by The Pew Charitable Trusts found the states are still struggling to recover from the economic tsunami of the Great Recession, which pummeled the country for 18 months between 2007 and 2009.

While their finances have largely stabilized, states are struggling to reverse the cuts in education, infrastructure and state aid to local communities that they were forced to make during the severe economic downturn.

The effects of the Great Recession cut states’ revenues by an inflation-adjusted $283 billion, according to Pew’s analysis.

“Despite nearly 10 years of national economic growth — in what would be the longest U.S. expansion on record by the end of June 2019 — states haven’t fully erased the effects of the recession,” the study found. “Instead of reaching the light at the end of the tunnel as the lost decade ends, some see the tunnel simply getting longer.”

For some states, the tunnel might never end, according to the sobering Pew assessment.

Overall, state tax revenues are 13.4% higher than in 2008, adjusted for inflation. But there’s a wide variance in revenue growth among the states.

Michigan’s inflation-adjusted tax revenue has grown just 2.8% from the previous peak in 2006 — among the lowest growth rates in the country — according to Pew.

State spending in Michigan has fallen more than 10% over the past decade. Michigan is spending less in inflation-adjusted dollars than all but seven other states.

At the same time, Michigan’s population is among the oldest and slowest-growing in the country.

If you believe that investments in education, transportation, communities, health care and public safety are crucial to building a vibrant state that attracts young talent, then you ought to be alarmed by these trends.

Part of the problem is that Michigan has an outdated tax system that doesn’t adequately reflect the needs of a changing economy requiring better-educated workers.

Michigan’s flat-rate income tax requires everyone to pay 4.25% of their income to the state, regardless of how much money they earn. That’s a problem in a state that has fewer payroll jobs now than it did nearly 20 years ago.

Citing a poll that found 76% of Michigan residents favor the idea, Michigan Advance Editor Susan J. Demas recently wrote that the time has come for the state to enact a graduated income tax system in which the wealthy pay a higher share of income in taxes than low-wage earners.

A graduated income tax could be structured to raise more money for the state while at the same time handing a tax cut to 90% of wage earners, according to a study by Michigan State University economist Charles Ballard.

Critics say a graduated income tax “punishes” success and would prompt the wealthy to leave the state.

A recent report by the Minnesota Department of Revenue found that the number of tax filers in the top bracket jumped nearly 10% in 2017 from 2016.

Minnesota boosted its top personal income tax rate from 7.85% to 9.85% in 2013, raising an additional $2 billion for its two-year budget.

But the tax hike was only possible because Democrats, seeking to undo severe spending cuts under GOP former Gov. Tim Pawlenty, controlled the Legislature and governor’s office.

Michigan’s 6% sales tax also is an anachronism, taxing mostly goods at a time when the economy has largely shifted to services. Taxing more services would raise more revenue and create a fairer tax system.

“By taxing sweaters and screwdrivers, but not taxing lawyer’s fees and football tickets, we create inefficiency as well as unfairness,” Ballard told me. “If I were in charge, I would tax all or nearly all final purchases. If we do that, we could reduce the rate and still bring in substantial additional revenue.”

But Michigan has deliberately chosen to forego additional tax revenue over the past three decades under largely Republican control of the Legislature and governorship.

State taxes were 6.4% of personal income in 2017, the same as in 1971. And the state is collecting about $11 billion a year less in taxes than allowed under the Headlee constitutional tax limit.

Democratic Gov. Gretchen Whitmer has vowed to boost state support for education, roads and communities. She has said she favors a graduated income tax, but isn’t pushing for it.

And any attempt to extend the sales tax to services is likely to be met with stiff opposition from powerful business lobbying groups.

As someone who has been observing and writing about state tax and economic issues for more than 30 years, I’m not confident that much will change in tax policy as long tax-averse Republicans control the Legislature.

But if Michigan is to become a more vibrant state, I need to be proven wrong. 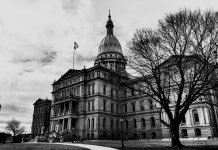 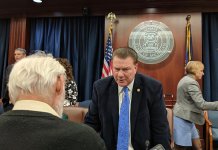