A class-action lawsuit against the state alleging that teenage prisoners’ civil rights were violated will proceed, after the state’s highest court declined to hear an appeal of a lower court ruling that granted prisoners protection from discrimination.

The class-action lawsuit alleges the prison staff’s indifference — and sometimes participation — in the rape or sexual harassment of teenage prisoners.

More than 900 people claim they were sexually assaulted and harassed by adult prisoners — and in at least one case coerced into sex by a prison guard — despite a federal law against housing juveniles with adults.

Michigan Supreme Court justices Brian Zahra and Stephen Markman wanted to hear the case, but the remaining three justices voted to allow it to head to trial. Justice Elizabeth Clement recused herself because she was previously employed as chief legal counsel for GOP former Gov. Rick Snyder.

The trial is scheduled to be heard in January 2020 by Washtenaw County Trial Court Judge Carol Kuhnke.

The Supreme Court order upheld a prior Court of Appeals decision, signed by Kirsten Frank Kelly and William Murphy, that a 1999 amendment excluding prisoners from the state’s Elliott-Larsen Civil Rights Act “does not pass constitutional muster.”

The state settled a separate prison rape lawsuit in 2009 for $100 million.

Plaintiffs in this case sued various prison officials, the Michigan Department of Corrections and Snyder in 2013, arguing that prison staff did not act on inmates’ sexual assault complaints. Michigan had the sixth-most inmates nationwide age 18 or younger who were housed in adult prisons in 2012, the Detroit News reported.

Although a 2004 state overview of the federal Prison Rape Elimination Act (PREA) claims that “no crime warrants a punishment of prison rape,” the office of GOP former Attorney General Bill Schuette fought fiercely against the lawsuit. Attorneys for his office argued that prisoners were not entitled to the same civil rights as unincarcerated citizens.

Deborah LaBelle, an attorney for the plaintiffs, said she hopes current Attorney General Dana Nessel’s office will be more sympathetic.

“These are kids. We have some responsibility to them. We failed them before, and we shouldn’t continue to fail them,” LaBelle said.

LaBelle represented plaintiffs in another case dismissed by a federal court in 2018 that alleged at least 500 people between the ages of 14 and 17 were locked up with adult prisoners in Michigan.

“The Supreme court exercised its prerogative to deny the application in Doe v. MDOC [Michigan Department of Corrections],” said Nessel spokeswoman Kelly Rossman-McKinney. “We will proceed accordingly, diligently exploring all options as we move forward.”

After the standards took effect in August 2013, the state was prohibited by the 2003 PREA from housing underage prisoners with adult inmates.

LaBelle claims the Michigan Department of Corrections kept on bunking kids and adults in the same cells until 2017.

MDOC spokesman Chris Gautz said he can’t comment on the pending lawsuit, but disputed that underage offenders were housed with adult inmates until 2017.

“No, we certainly have had that [protection] in place well before that,” Gautz said.

Seventeen-year-old offenders in Michigan can still be tried as adults under state law, but they are now separated by “sight and sound” under PREA, Gautz said.

A plan to stop courts from charging 17-year-olds as adults has meanwhile passed the state House, but has not yet been approved by the Senate.

Michigan, Missouri, Texas, Georgia and Wisconsin are the only states that automatically charge 17-year-olds as adults, regardless of the crime they have been accused of  committing.

Missouri has approved a law raising the age to 18, although it does not go into effect until January 2021.

‘Raise the age’ criminal justice reform to get Senate hearing

In addition to arguing that prisoners did not enjoy the same civil rights as free citizens, attorneys under Schuette suggested that perhaps the alleged prison rapes had been consensual, LaBelle said.

An attorney from the former attorney general’s office tried to subpoena a reporter’s notes and a radio interview with LaBelle as evidence. 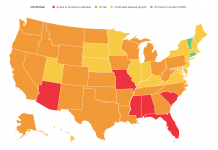