A GOP-led Michigan House panel passed a budget proposal Wednesday that would prohibit the state from spending any taxpayer money on the new Gordie Howe International Bridge.

Inking the deal on the bridge was a signature achievement for GOP former Gov. Rick Snyder.

Construction has been underway for over a year on the long-planned bridge connecting Southwest Detroit and Windsor, Ontario, with Canada paying for the entire $4.4 billion project in exchange for the rights to all toll collection.

The Michigan Department of Transportation (MDOT) has been spending money for land acquisition and other activities that the Canadian government is later reimbursing, a practice the new bill seeks to stop.

Some of the project’s supporters, however, say House Bill 4246 advanced by the full House Appropriations Committee Wednesday could halt the whole project, as the Detroit News reported.

State Rep. Matt Maddock (R-Milford) sponsored the fiscal year 2020 transportation budget bill, and the full House is scheduled to vote on it Thursday. Maddock said people are making “a mountain out of a molehill” and that he fully supports the bridge project.

“We just want to create more transparency. … The bridge will not be shut down,” Maddock told reporters. “We’re not going to shut down construction on the bridge. That’s preposterous.”

Maddock added that he does not believe “Michigan should be the credit card for Canada.”

House GOP spokesperson Gideon D’Assandro later said that the plan’s intent is to ensure that the Legislature has a seat at the table when MDOT and Gov. Gretchen Whitmer’s administration eventually work out deals regarding reimbursement.

MDOT spokesperson Jeff Cranson said the span has backing from business and labor.*

“Canada, through the Windsor Detroit Bridge Authority, is financing the Gordie Howe International Bridge because of the vital benefits it will provide to the flow of commerce between the two countries,” he said. “The project enjoys broad support from job providers and labor leaders across Michigan, and we are confident lawmakers know that.”

A Whitmer spokesperson did not respond to a request for comment. The Canadian government declined to comment on the legislation on Wednesday,

In May, Whitmer and Canadian Minister of Infrastructure and Communities Francois-Philippe Champagne issued a joint statement reiterating their support for the new bridge named for the Detroit Red Wings hockey legend.

“In the spirit of the ongoing Canada-Michigan collaboration, we are pleased to reaffirm our full support and commitment to the Gordie Howe International Bridge project. This project is a landmark investment in cross-border infrastructure that will create thousands of well-paying jobs, encourage investment, improve businesses’ bottom lines and spur economic growth in Canada and Michigan,” they said.

“The project is a top priority for both Canada and the State of Michigan, and both Minister Champagne and Governor Whitmer are committed to doing everything necessary to ensure the continued timely achievement of critical milestones towards the bridge’s completion.”

Calley served under Snyder, who entered into the agreement with Canada. The former LG said that the bill’s language, as written, would effectively kill the planned border crossing.

“The language, as proposed, would not allow the department to administer functions that would be necessary to move forward with the bridge,” said Calley, now president of the Small Business Association of Michigan.

“Whether pre-paid or reimbursed by the Canadian government … the language, as presented [on Wednesday] morning, simply wouldn’t allow the project to continue. If that’s not the intent, I’m pleased to hear that and I’ll look forward to the restoration of the language.”

Calley expressed concern about the kind of message it sends to Michigan’s northern neighbor, given that the country is footing the whole bill.

“[Canada] has been absolutely 100% faithful to every single thing they said,” Calley said. “I think that we should treat them like a friend because they’ve been a great friend.”

Planning of the long-planned bridge dates back to the early 2000s, as its development has come in fits and starts. The new bridge has long been opposed by the Moroun family, which fully owns the Ambassador Bridge border crossing just north of where the Gordie Howe Bridge is expected to be built.

The Moroun family has donated to several members of the House GOP, including Maddock, whose political action committee received $5,000 in April.

Maddock waved off any notion that the contribution would impact the legislation.

“The Moroun family is one of probably 200 donors that I have,” Maddock said, adding that the donation makes for just a tiny percentage of what he’s received in overall contributions. “I’m not here to represent anyone in particular.”

Attempts to reach the Moroun family for comment were unsuccessful. 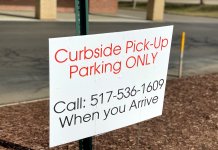