WASHINGTON — U.S. Rep. Justin Amash’s breakup with the House Freedom Caucus this week is the latest indication that the Michigan Republican has become increasingly isolated on Capitol Hill.

The libertarian-leaning Cascade Township Republican has long been known for his independent streak. When House Republicans were in charge, he and his conservative colleagues prodded their party to the right. Now he’s changing his approach by distancing himself from his former allies — and possibly even gearing up for a 2020 Libertarian bid to oust President Trump from the White House.

So far this Congress, Amash has broken with his party on floor votes more than any other member of the U.S. House, according to a ProPublica database. He’s voted against Republicans 33.1% of the time in 2019.

Most notably this year, Amash sided with Democrats in an effort to block Trump’s U.S. border emergency declaration. Trump’s declaration was an attempt to circumvent Congress to funnel cash to build a border wall — a move Amash called a “massive executive overreach.”

He defied his party by voting “present” in February on a resolution to direct the removal of U.S. Armed Forces from the Republic of Yemen that weren’t authorized by Congress.

Amash also voted “present” in March on a resolution expressing opposition to banning service in the Armed Forces by openly transgender individuals. Both resolutions passed the House with largely Democratic support.

But that’s not true.

Amash and McCarthy have voted together more often than not in this Congress. They’ve agreed on 65% of House votes so far this year, according to ProPublica.

The same comparison between Pelosi and Amash can’t be made for this Congress, because U.S. House speakers — who set the agenda — traditionally don’t vote. Still, the fact-checking website Politifact found that Amash has voted with McCarthy more than Pelosi every term he has been in Congress.

Amash has agreed with the No. 2 Democrat in the U.S. House, Majority Leader Steny Hoyer (D-Md.), on just 26% of the votes so far this Congress.

Amash told reporters after McCarthy accused him of siding with Pelosi, “I think everyone knows he’s lying. That’s typical Kevin.”

McCarthy’s office did not respond to a request for comment from the Michigan Advance.

Amash also has frequently sided with members of the Freedom Caucus. This Congress, he’s voted with U.S. Rep. Mark Meadows (R-N.C.) 69% of the time and with former Freedom Caucus Chair Jim Jordan (R-Ohio) 74% of the time.

The Michigan Republican has voted against Democrats on many of their top legislative priorities. Among them, he voted against high-profile Democratic bills on voting rights, climate change, immigration, background checks for guns and LGBTQ rights.

Amash appears to relish his reputation as antagonist to both sides. 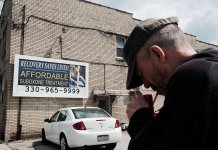