After uncovering considerable problems at branch offices and struggling with computer problems since taking office, does Secretary of State Jocelyn Benson regret making a 30-minute customer service guarantee on the 2018 campaign trail?

“I’ve spent my whole life setting goals and reaching them,” she told the Michigan Advance on Thursday at the Mackinac Policy Conference. “And so it really originated in my view, saying, ‘How would I define my success as a secretary of state for myself?’

“And that would be in decrease wait times and increase [voter] turnout. And then, what does that mean? Well, wait time should be consistent throughout the state and 30 minutes in or out I think is, is what citizens deserve and should expect them. And so that’s where I started from. And to me … it can be presented as a campaign pledge or promise, but it’s really my own internal metric of success for doing this job.”

Benson touted the announcement that her office would soon allow Michigan residents to make appointments in advance at every branch location in the state.

The program’s expansion will begin in mid-June. Benson spokesperson Shawn Starkey told the Advance that the department will be “rolling it out in phases” and that all branches will have appointment capability by the end of this summer.

Currently, 43 of the state’s 131 branches allow appointments to be made ahead of a visit.

Last month, Benson completed a tour of each one of the state’s branch offices in her first 100 days in office, fulfilling another campaign promise. The Advance reported in March on the Secretary of State’s efforts to revamp another troubled program in its branch offices, the MI-TIME system that until February allowed visitors to virtually take their place in line ahead of a branch visit.

At the time, Starkey said that “taking [MI-TIME] down so we could reconfigure and recalibrate … is certainly one piece of ensuring we can get to the 30-minute guarantee,” but declined to offer an estimated date by which the system might return.

That sparked criticism from Michigan Republican Party Chair Laura Cox, who declared that “[v]oters will remember when Jocelyn Benson failed to keep her promises.”

Asked by the Advance on Thursday if the department was concerned about implementation of the new appointment system given the previous difficulties with MI-TIME, Benson said they had given considerable thought to the matter.

“We’re the last state that still has this MI-TIME queuing system,” Benson said. “It’s one of the reasons we took it offline to recalibrate, because even though people appreciated the convenience, it just wasn’t working effectively.”

“We’ve actually developed [the new appointment system] internally, we did not have to go to an external vendor. … I said, ‘What if we just did it ourselves?’ And we did, so it’s budget-neutral, and effective, and it’s an improved system.”

Benson said she’s “confident” that the 30-minute guarantee will become a reality for customers.

“I love a challenge,” she said. “I’ve never backed down from them my whole career and I love creating them.” 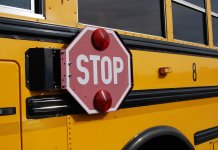 Should private schools get public funds? The Supreme Court will take up a key case in March.