In the face of blowback from his party, the West Michigan Republican doubled down on his arguments that Trump “engaged in impeachable conduct.” Amash, an attorney, sparred openly with the top House Republican and drew rebukes from members of his own conservative House Freedom Caucus.

The group, which the libertarian-leaning Amash co-founded, voted on Monday to condemn him, but did not toss him out. He has skipped a lot of meetings since Trump took office and said in March, “They’ve decided to stick with the president time and again, even where they disagree with him privately.”

Meadows were among the nine members who founded the caucus back in 2015, with the aim of shrinking the government.

He and U.S. Rep. Jim Jordan (R-Ohio), another founding member, told the Michigan Advance on Monday that they had just come from a Freedom Caucus board meeting where lawmakers were unanimously opposed to Amash’s position.

Meadows and Jordan have been among Trump’s staunchest defenders in the wake of Special Counsel Robert Mueller’s investigation.

“I think he’s wrong. I just think Justin’s wrong on this,” Jordan said. “We had a board meeting and every single member of the House Freedom Caucus board felt he was wrong.”

Amash was not at that meeting, Jordan said, but he had spoken separately with Amash after his public call for Trump’s impeachment.

Jordan said he doesn’t expect an effort to remove Amash from the Freedom Caucus. And Meadows said the group hadn’t had discussions of that nature.

“Right now, we’re trying to understand why Justin took the position he did,” Meadows said. “We don’t agree with his position. It’s a poorly informed decision, a conclusion that’s certainly faulty.” Meadows added that hopeful about “convincing” Amash and “sharing documents with him that he has not seen.”

Meadows and Jordan said they don’t expect any other Republican lawmakers to join Amash. “I think he’s going to be alone,” Jordan said.

U.S. House Minority Leader Kevin McCarthy (R-Calif.) slammed Amash in an interview Sunday with Fox News, saying, “He votes more with [House Speaker] Nancy Pelosi (D-Calif.) than he ever votes with me. It’s a question whether he’s even in our Republican conference as a whole.”

Amash fired back on Monday, telling reporters, “I think everyone knows he’s lying. That is typical Kevin.”

The conservative group Club for Growth, which is known for backing primary challenges to Republicans who don’t toe its line, also put out a statement condemning Amash. So far, two Republicans have emerged saying they’ll primary him in 2020, including state Rep. James Lower (R-Greenville).

Meanwhile, there’s growing speculation that Amash, who’s flirted with running president next year as a Libertarian, will pull the trigger and could hurt Trump, especially in Michigan. The president kicked off his campaign in March in the congressman’s 3rd Congressional District, but unlike several of his colleagues, Amash did not attend the Grand Rapids rally.

Several other House Republicans on Monday highlighted Amash’s long-standing willingness to split from his party.

“Justin always takes a principled stand based on what he believes, so although I disagree with him, I respect his opinion,” said U.S. Rep. Thomas Massie (R-Ky.), who’s friends with Amash.

The two were among the 13 House Republicans to back a Democratic-led effort to block Trump’s emergency declaration along the U.S.-Mexico border earlier this year.

U.S. Rep. David Schweikert (R-Ariz.) said of Amash, “Justin is a unique individual because in many ways he is our closest to being a true libertarian.” Schweikert said he planned to have a conversation with Amash about his thinking on impeachment.

“I’m one of those who’s been walking around with the binder on [Special Counsel Robert Mueller’s] report,” Schweikert said, noting that he’s about 60 percent done reading it.

“At a certain point, I get worried that some of this is more meant to keep the rage going in part of the Democratic base than it has to do with public policy,” he said of the calls for further investigations.

“It rips my heart out because even though the Democrats are in the majority here, I thought we would actually do some things. We’ve been here what, five months? Please, there’s things that actually have to be done and it’s so frustrating that we’re not a policymaking body, we’re a theatrical body.”

‘I will be on that platform’: Michigan House Dems who survived the Capitol attack look to Inauguration Day 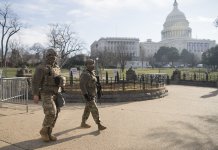 ‘I will be on that platform’: Michigan House Dems who survived...

Amash goes to war with GOP

‘I will be on that platform’: Michigan House Dems who survived...